Jencie Fagan of Reno, NV, a school teacher, went above and beyond with her brave stand against a school shooter who had already wounded two students. She courageously put herself in harm’s way by standing in front of the armed student, protecting others as she calmly talked the boy into putting down his weapon.

Jencie Fagan of Reno, Nevada, has been recognized for going above and beyond with her calm demeanor and brave stand against a school shooter.  A gym teacher at Pine Middle School in Reno, Jencie was preparing for class when she was startled by the sound of gunshots.  Running into the hallway she discovered an armed 14-year-old boy who had wounded two fellow students, and was trying to shoot additional students.  After directing nearby children to safety, Jencie, with complete disregard for her own, called out the boys name and calmly approached him.  By directly engaging the shooter, she was able to focus all of his attention on her and away from shooting other children.  Eventually earning his trust, Jencie convinced him to put down his weapon, then immediately embraced him in a “bear hug” until police and other staff arrived to help.  Jencie’s quick thinking and courageous actions prevented a devastating tragedy.  The extraordinary courage and selflessness displayed by Jencie Fagan is an inspiration and credit to the state of Nevada and to her fellow Americans. 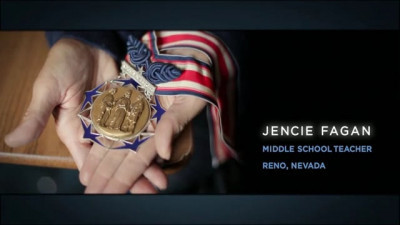 Introducing the Medal of Honor

Students will collaborate and communicate their prior knowledge to help organize their thoughts about the Medal of Honor.

A Student of Mine

A Student of Mine: Modification for Distance Learning