A1C William Pitsenbarger: A Hero Who Will Live On Forever 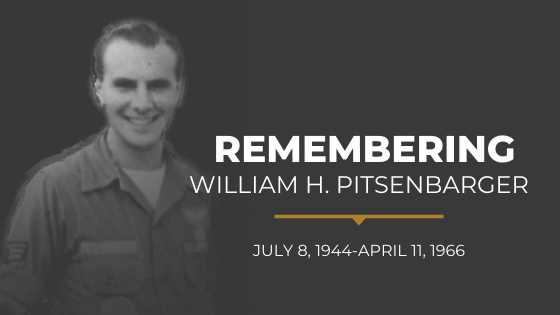 Who is William Pitsenbarger?

Son, best friend, partner, hero, role model, Medal of Honor Recipient — these are just a few titles accurately describing the Air Force Pararescueman who sacrificed his life to support soldiers who were severely pinned down during the Battle of Xa Cam My in the Vietnam War.

If you ask those who knew Pitsenbarger or fought beside him, you’ll hear words like “extraordinarily courageous,” “selfless,” “brave,” “the epitome of a hero,” “kind,” “comforting,” and an array of other praises that continue to define his legacy today.

A1C Pitsenbarger, an Ohio native, is one of three Medal of Honor Recipients from Piqua, Ohio. When he was just a junior in high school, Pitsenbarger had dreams of joining the U.S. Army as a Green Beret, but his parents would not give their permission. Determined to protect his country and serve in the armed forces, Pitsenbarger joined the U.S. Air Force upon graduating high school and went on to basic training in San Antonio. During training, he volunteered for Pararescue and completed the requirements as one of the first groups of airmen to qualify right out of basic training. By the time he reached the Vietnam War, where he sacrificed his life for his fellow men, Pitsenbarger had been in almost 300 combat missions, all by the age of 21.

On April 11, 1966, Airman Pitsenbarger was aboard a rescue helicopter responding to a call for evacuation of casualties incurred in an ongoing firefight between elements of the United States Army’s 1st Infantry Division and a sizeable enemy force approximately 35 miles east of Saigon. Pitsenbarger volunteered to ride a hoist more than one hundred feet through the jungle canopy to the ground under fire. He then organized and coordinated rescue efforts, cared for the wounded, prepared casualties for evacuation, and insured that the recovery operation continued in a smooth and orderly fashion. Through his personal efforts, the evacuation of the wounded was greatly expedited. Airman Pitsenbarger refused evacuation so that he could move more wounded soldiers to safety. He stayed behind on the ground and continued to perform medical duties. Shortly thereafter, the area came under severe sniper and mortar fire. Pitsenbarger took up arms with the besieged infantrymen. Even after becoming fatally wounded, he courageously resisted the enemy, braving intense gunfire to gather and distribute vital ammunition to American defenders. In the vicious fighting that followed, the American forces suffered 80% casualties as their perimeter was breached. Airman Pitsenbarger willingly exposed himself to almost certain death by staying on the ground and ultimately perished while saving the lives of his wounded countrymen. His bravery and determination will live on forever.

Learn more about MOH Recipient William Pitsenbarger here. Donate here to help perpetuate the legacy of the Medal of Honor. The Congressional Medal of Honor Foundation is a registered 501(c)(3) non-profit organization with tax ID number 25-1828488.