Celebrating Independence Day with the Congressional Medal of Honor Society 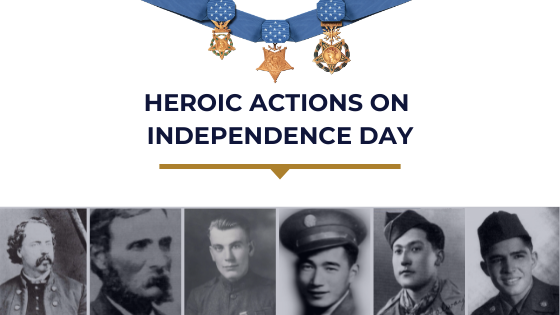 Independence Day is a time to celebrate the founding of our country and to honor all those who have fought for our freedom. In honor of this day, we would like to share the stories of six men who went above and beyond the call of duty in service to our country – and did so on the Fourth of July.

Charles E. Capehart was awarded the Medal of Honor for his service in the U.S. Army during the Civil War. On Independence Day, 1863, he went beyond the call of duty when he charged down a mountainside at midnight through heavy rain to capture the enemy’s fleeing wagon train. His attack resulted in his men destroying many enemy wagons and taking in soldiers as captives.

Marcus A. Hanna also served in the U.S. Army during the Civil War. He too was awarded the Medal of Honor for his actions on June 4th, 1863 during a battle in Port Hudson, Louisiana. Recipient Hanna displayed selfless service when he voluntarily exposed himself to heavy fire to get water for his comrades who were in rifle pits.

On Independence Day in 1918, Recipient Thomas A Pope was serving in the U.S. Army during World War I. He was positioned in Hamel, France, when his company was halted by hostile machine-gun fire. Recipient Pope decided to move forward alone and rushed a machine-gun nest. He was successful in his efforts and continued to hold off other enemy personnel until reinforcements arrived and captured them.

On July 4, 1944, Recipient William Kenzo Nakamura showed extreme courage and bravery during an intense fight near Castellina, Italy. When his platoon was pinned down by enemy machine-gun fire, Recipient Nakamura crawled and approached the hostile nest and was successful in silencing the enemy’s engagement. As a result of his actions, his platoon was able to continue their advance. Later on in the day, his company was ordered to withdraw from their position. Recipient Nakamura insisted on covering the withdrawal and sacrificed his life for the safety of his comrades. For these two heroic actions, he was awarded the Medal of Honor on June 21st, 2000.

Recipient Frank H. Ono was awarded the Medal of Honor for his service in the U.S. Army and the selfless actions he took on Independence Day in 1944. When his platoon was in danger of being encircled and was ordered to withdraw, Private First Class Ono volunteered to cover it. With complete disregard for his own safety, he made himself a target of enemy fire until his platoon could reach safety. When the task was successfully completed, he descended the hill in various stages until he was able to rejoin his comrades.

On July 4th, 1951, Recipient Leroy A. Mendonca went beyond the call of duty during his service in the U.S. Army during the Korean War. His platoon, in an intense battle, had captured Hill 586 and were in their newly won position when they were attacked by a superior enemy force. When his platoon was ordered to withdraw to a secondary line of defense, Recipient Mendonca stayed behind and remained in an exposed position to cover the platoon. He bravely battled off the enemy until he was mortally wounded. His actions stalled the assault and ultimately protected his platoon’s movement to the secondary line of defense.

These courageous men sacrificed their safety to serve their country on Independence Day. If you would like to learn more about the Medal of Honor Recipients and their stories of valor, we invite you to click here.