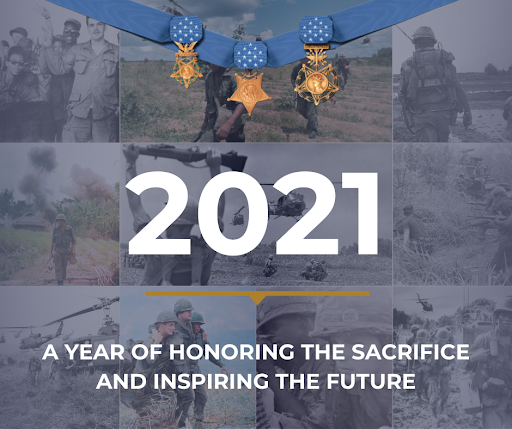 Despite the challenges that 2021 presented, the Congressional Medal of Honor Society continued to advance its mission of ensuring the preservation and legacy of the Medal and to support the outreach and education efforts of the living Medal of Honor Recipients. Through the continued dedication of Recipients and supporters, brand new initiatives were launched and missions were accomplished.

Below are just a few of the initiatives that took place this year as we worked to educate and inspire future generations; connect Recipients to each other, veterans, and local communities; and preserve the legacy of the Medal of Honor.

On May 21, Ralph Puckett Jr. was also awarded the Medal of Honor by President Biden for “the extraordinary leadership and courageous example [he] exhibited …for his actions in 1950 during the Korean War.”

Every year since 2007, a nationwide search is conducted to select five U.S. citizens and one organization to receive the Citizen Honors Awards. The Awards are one of the numerous ways the Congressional Medal of Honor Society fulfills its mission to promote the values embodied by the Medal: courage, sacrifice, integrity, commitment, patriotism, and citizenship.

In March, the Society announced the finalists for the 2021 Citizen’s Honor Awards. The Awardees were celebrated in Charleston, South Carolina, in July, and the Citizen Honors Valor Awardees were honored in Boston, Massachusetts, in September.

New Video Library Launched: The Congressional Medal of Honor Society launched a new video library on its site. This launch furthers the Society’s mission of research, preservation, and education by featuring Living History videos, documentaries, and more content of Recipients sharing their own stories.

Mary Walker Video Receives Telly Award: One of our Living History videos highlighting the life and work of the only female Medal of Honor Recipient, Dr. Mary Walker, was awarded a Silver Telly Award  in the General / Non-broadcast category.

Mourning the Losses of Recipients Who Passed This Year

This year was filled with moments of excitement, joy, mourning, anticipation, and dedication to honoring the sacrifice and inspiring the future. We are grateful for all of you who contribute to our mission as we preserve and share the legacy of Medal of Honor Recipients and support them in their outreach initiatives.  And we look forward to continuing and expanding this mission in the years to come.

The Congressional Medal of Honor Society, a 501(c)(3) nonprofit organization, is dedicated to preserving the legacy of the Medal of Honor and its Recipients, inspiring Americans, and supporting the Recipients as they connect with communities across the country. Chartered by Congress in 1958, its membership consists exclusively of those individuals who have received the Medal of Honor, including 67 living Recipients.

Help Honor the Sacrifice; Inspire the Future on #GivingTuesday

On a recent day aboard the U.S.S. Yorktown in Mount Pleasant, South Carolina, a U.S. Army veteran strolled by a family touring the historic aircraft carrier at Patriots Point Naval…

Organizations can help champion Society’s unique, free Character Development Program The Congressional Medal of Honor Society (the Society), the nation’s only non-profit organization chartered by the U.S. Congress to preserve…