On National POW/MIA Recognition Day we honor all those who were prisoners of war and those missing in action while defending the United States.

The first prisoners of war presented with the Medal of Honor were 19 men who participated in what has become known as Andrew’s Raiders during the Civil War. This was an espionage mission deep in Confederate territory to destroy a main railroad line between Chattanooga, Tennessee, and Atlanta, Georgia. All 24 men involved were captured by Confederate forces on April 24, 1862. Eight were executed. The others escaped or were exchanged as prisoners of war.

At least 13 Medals of Honor have been presented to service members for their actions while a POW, from the Civil War to Vietnam. These include: Andrew Traynor from the Civil War, who fought his captors and allowed a group of captured prisoners to escape; Tibor Rubin, a Holocaust survivor who nursed and inspired other POWs during the Korean War; and Humbert “Rocky” Versace and Lance Sijan, whose resistance to the North Vietnamese attempts to break their will inspired other prisoners to resist as well.

Like 12 other Medal of Honor Recipients, Versace and Sijan died in POW camps. Willibald Bianchi was a POW during WWII when the boat where he was held prisoner sank in the Pacific Ocean. During the Civil War, soldiers James S. Hill and Lorenzo Denning died in Confederate POW camps.

Some Recipients were taken prisoner during their Medal of Honor action. Hiroshi Miyamura, one of these men, was captured after covering the withdrawal of his unit during the Korean War. His Medal of Honor award was kept quiet until his release from a prisoner of war camp.

In the Civil War, Bernard Harley and Henry Wilkes were part of the crew of a small picket boat trusted to sneak up on an important Confederate boat, the CSS Albemarle, and sink it. The picket boat had a torpedo at the end of a long pole, which needed to be rammed into the Albemarle. The crew succeeded in their mission, but all were captured or killed. Harley and Wilkes survived, but spent time as Confederate prisoners.

Seventy-seven Medal of Honor Recipients remain Missing in Action to this day, resulting from their military service. Some were most likely killed in action but the fate of others is unknown.

While trying to jettison depth charges and save his ship, Osmond K. Ingram was blown overboard by a torpedo during WWI. Michael J. Estocin, a Navy pilot, crashed into the ground near Haiphong, North Vietnam, after carrying out his mission despite his his plane sustaining heavy damage. Leonard F. Mason, U.S. Marine, disappeared during battle in Guam during WWII. George Watson went down with his ship during WWII after helping save the lives of those who could not swim.

Lee H. Phillips is believed to be buried in an unknown grave along with other Marines at the Chosin Reservoir in North Korea. Charles Loring, Jr., a veteran of WWII and an Air Force pilot, dove his plane into enemy emplacements in Korea, saving U.S. lives. Fernando L. Garcia’s remains were not recovered after he threw himself on a grenade during the Korean War to save the lives of other Marines. Also during that conflict, Charles L. Gilliland, Frederick F. Henry, and Frank N. Mitchell remained behind on the front lines to cover their unit’s withdraw from oncoming enemy elements. None were ever recovered.

The Congressional Medal of Honor Society salutes all these brave service members. 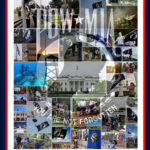 Honoring Those Who Have Served: National Military Appreciation Month

[caption id="attachment_19106" align="aligncenter" width="746"] Photo by Virginia Tech Corps of Cadets[/caption] Every year during May, we take the opportunity to show our gratitude to current and former members of the…