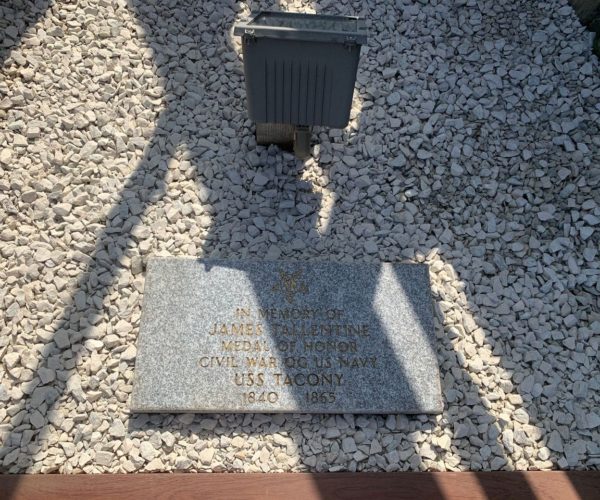 The Gravemarker Program is one of the many ways that the Society honors the sacrifice and bravery of Medal of Honor Recipients who are no longer living. By supporting the creation of gravemarkers and headstones, the Society is able to help communities across the nation keep the stories of these amazing individuals alive for future generations.

This program allows researchers and next-of-kin to apply for a gravemarker or headstone for a Medal of Honor Recipient when the U.S. Veterans Administration or local funds cannot provide this distinction.  Gravesites must be verified as a Medal of Honor Recipient’s gravesite and the cemetery or place of burial must agree to the placement of the headstone or gravemarker.

The gravemarker in the image above was created for Medal of Honor Recipient James Tallentine, a Quarter Gunner in the U.S. Navy who was stationed aboard the USS Tacony during the Civil War. On October 31, 1864, during the fight for Plymouth, North Carolina, Tallentine displayed gallantry and was calm under pressure when he participated in landing and spiking a 9-inch gun while facing hostile fire from Confederate forces. For his actions, he was awarded the Medal of Honor on December 31, 1864.

He was later killed in action while storming Fort Fisher on January 15, 1865.  Lieutenant Commander Truxtun, commander of the USS Tacony, noted that Tallentine “reached the top of the parapet under a murderous fire, only to fall inside the fortifications, giving a valuable life to his country.” You can read more about his courage in this document of the fight. Because his body was never recovered from the fortifications, a gravesite was never established for him.

In 2019, The Port of Plymouth Museum in Plymouth, North Carolina, offered to place a gravemarker reading, “In Memory of,” by an American Flag at the entrance to their museum. The Society’s Gravemarker Program paid for the marker, the shipping, and installation of the marker. In July 2020, the installation of Tallentine’s gravemarker was completed.

You can learn more about James Tallentine and read his full Medal of Honor citation here.

This program is not available to applicants if the cemetery or burial site meets the criteria for funding from the U.S. Veterans Administration or if the Recipient or the burial site owner is opposed to this designation. Applicants requesting a gravemarker for the movement of remains or reburial will not be accepted. Additionally, if the Medal of Honor Recipient is suitably noted on another memorial or recognized site, funds from the Society’s Gravemarker Program may not be available.

You can find the full program details and application here. Please feel free to contact us with any questions about the Gravemarker Program.

Charleston, SC – November 23, 2020 – In an effort to increase their reach to students, educators and veterans and the involvement of the 69 living recipients of the Medal…