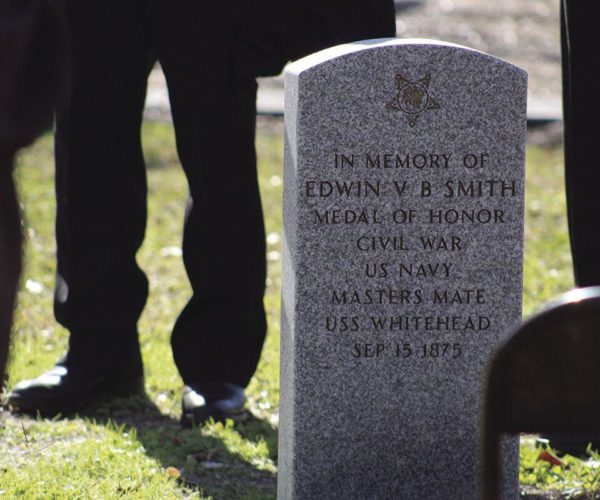 The Congressional Medal of Honor Society is proud to support Recipients in their work during their lives, as well as honor and preserve their legacy after they pass away.

Each Recipient has a unique story, and it is our mission to recognize and share every one of them.

On January 14, 2021, The Veterans of Foreign Wars Post 4403 assisted us in this mission by holding a special ceremony to honor Medal of Honor Recipient Edwin Smith, who passed away in the 1875 Indianola Hurricane.

Recipient Edwin Smith served in the U.S. Navy during the Civil War. On October 3rd, 1862, during the expedition against Franklin, Virginia, his ship was caught in an attack.

While sailing the Blackwater River, the U.S.S. Whitehead became grounded in a narrow passage. A rope needed to be run to shore to assist the ship back to deeper waters. Smith realized the hazard of lowering the ship’s boat and sprang into action, swimming to shore with the line under heavy enemy fire. His bravery enabled his ship to continue to maintain its fight against the enemy, for which he was awarded the Medal of Honor.

After being discharged from the U.S. Navy, Edwin Smith remained a civilian mariner. In 1875, a major hurricane hit the port of Indianola, Texas, bringing a devastating and deadly storm surge up the coast. Smith and many others in the area lost their lives.

Though his remains were never recovered, a memory marker in nearby Port Lavaca, Texas, was placed in his honor.

The Veterans of Foreign Wars of the United States was founded to protect those who protected our freedom.  The nonprofit is composed of Veterans and military service members from the guard and reserve forces. Their mission is to advocate for Veterans, ensuring that they are respected for their service to this country through programs and initiatives.

On January 14th, 2021, the sector of Port Lavaca, Texas, held a ceremony in Port Lavaca Cemetery recognizing the fearless actions of Recipient Smith. They unveiled a cenotaph, which was funded through the Congressional Medal of Honor Society’s Gravemarker Program, and took turns reading about his history. The event concluded with a 21-gun salute and the playing of taps.

We thank the VFW for this act of honoring and preserving the legacy of a Medal of Honor Recipient who went above and beyond the call of duty to save his fellow men.

This blog is based on an article that originally ran in The Port Lavaca Wave on 19 January 2021. Information and image used with permission.

In this edition of recognizing African American Medal of Honor recipients, we are honoring Medal of Honor Recipient Frank Smith for his service during the Chinese Relief Expedition. What was…

Medal of Honor Recipient Ronald E. Rosser passed away on August 26, 2020, in Bumpus Mills, Tennessee, at the age of ninety. He was awarded the Medal of Honor for…

Medal of Honor Recipient Ronald J. Shurer II was a brave man who risked his life to save fellow soldiers wounded during deployment in Afghanistan in 2008. He is nothing…