Medal of Honor Recipient Ronald E. Rosser passed away on August 26, 2020, in Bumpus Mills, Tennessee, at the age of ninety. He was awarded the Medal of Honor for acts of extreme courage and determination during the Korean War.

Rosser was the oldest son of seventeen children and was born in Columbus, Ohio, in 1929. He enlisted in the Army at seventeen and served for three years before working briefly as a coal miner. In 1951, he reenlisted after the death of his brother, Richard, in the Korean War.

On January 12, 1952, then-Cpl. Rosser and the rest of Company L, 38th Infantry Regiment faced an attack from two directions near Ponggilli, Korea. Cpl. Rosser charged the enemy trenches alone until he exhausted all of his ammunition and returned to his Company for more. He courageously repeated these actions three times, killing at least thirteen enemy combatants. Though he was wounded, he repeatedly crossed open terrain under enemy fire to remove his fellow wounded soldiers whose injuries were more severe than his own.

The Medal of Honor was bestowed upon SFC Rosser by President Harry S. Truman on June 27, 1952, for his acts of service above and beyond the call of duty. 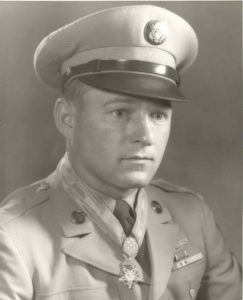 SFC Rosser served his country as a soldier in the United States Army for twenty years (some of which he spent working as an Army Recruiter in West Palm Beach, Florida) before retiring in 1968. He attempted to reenlist a second time following the death of his brother, PFC Gary Edward Rosser, USMC, during the Vietnam War, but his request was denied.

Rosser was appointed the honorary title of a Brevet Colonel in the Ohio Militia and was also inducted into the Ohio Veterans Hall of Fame. Additionally, he briefly taught at Roosevelt Junior High School in West Palm Beach, Florida after graduating from Atlantic University. Later in his life, he became the Police Chief of Haverhill, Florida and worked at the Department of Veteran’s Affairs.

Not only did Rosser give back to his country through his service in the Army, he also spent much of his retired life connecting with the public. Through the Congressional Medal of Honor Society, he visited schools and Veterans groups and helped with other outreach activities. He especially enjoyed supporting scouting programs and the Freedoms Foundation at Valley Forge (FFVF), often times paying travel expenses for scouts in his area to attend events at FFVF’s campus in Pennsylvania.

Throughout his life, Rosser exemplified the values embodied in the Medal of Honor: courage, sacrifice, commitment, integrity, citizenship, and patriotism. His legacy will continue to inspire Americans for generations to come.

“Ron will be missed, that’s for sure. He was a colorful guy who never missed a Medal of Honor event, even when his health was bad. He especially liked the school visits where he could connect with youngsters to explain the true meaning of sacrifice. He liked being around his fellow Recipients – embracing each and everyone with respect. I will always remember his words  ‘It’s not about what you did to earn the Medal of Honor but that those you fought with thought you were worthy of it!’ You will be missed!”