The Medal of Honor was created during the U.S. Civil War to recognize the service of military members who went above and beyond. It remained the United States’ only military medal for exemplary service until World War I.

However, requirements and standards for the Medal had evolved over that time. Additional regulations included a time limit, restrictions on self-nomination, and requirements for eyewitness statements and official reports.

In response to those concerns, Congress ordered the Army to create a board of five retired generals to review all the Army Medals of Honor awarded since the Civil War. The Review Board began work in June 1916 and would take eight months to finish.

The Review Board’s report, sent to the Army Adjutant General’s office in February 1917, disclosed their methodology and their evaluation criteria. To help remove potential bias, names were removed from the Medal of Honor citations and replaced with numbers. When it could be found, the Board was provided with supporting documentation for each award.

The Board took a light-handed approach to evaluation, noting that they did not want to second-guess the decisions of those previously in command simply because the standards had changed:

“The rewards which these men received were greater than would now be given for the same acts… the board has felt bound to measure the act by the standard established by the authorities at the time of the award, rather than by that now observed, thus avoiding…retroactive judgement.”

Of the 2,625 Army Medals of Honor reviewed, the Board chose to rescind 911 of them. Most of those were from two large groups: the 27th Maine Infantry and President Abraham Lincoln’s funeral guards.

The 27th Maine Infantry had been stationed in Washington, D.C., as the Confederates advanced nearby in 1863. The regiment’s enlistments were just coming to an end. The Army offered a Medal of Honor to those who stayed to defend the Union’s capital. About 300 out of 800 soldiers agreed to remain. However, no one kept good records of which soldiers stayed and which went home. As a result, Medals were issued in the name of all the soldiers and Lieutenant Colonel Mark Wentworth was put in charge of distributing the Medals to those who stayed. Due to the confusion, the 1916 Review Board determined that the basis for the awards were suspect and rescinded all 864 awards.

The second large group of Medals revoked were ones that went to the members of President Abraham Lincoln’s funeral guard. This group of 29 soldiers ceremoniously protected the president’s remains as they toured the country. The Review Board decided that those Medals were not awarded for valor and therefore erroneously bestowed.

Additional Medal of Honor awards were rescinded when the action was not valorous, even by the original standards. For example, one Medal had been sent to the grieving father of a soldier who had died in the Civil War. Another had gone to a soldier for putting out fuses. The most notable example was the only woman to ever receive the Medal of Honor, Dr. Mary E. Walker, for whom the Board noted “there is no evidence of distinguished gallantry.”

The Board also reluctantly revoked the awards to five civilians. All five were civilian scouts for the Army, but the Medal of Honor laws said that the Medal could only go to enlisted men or officers in the military. This group included William “Buffalo Bill” Cody. The Review Board wrote that these five had “rendered distinguished service in action and fully earned their medals” so the Board had “hope that a modification of the law will permit them to retain the medals.”

Decades later, six of the Medals of Honor rescinded by the 1916-1917 Review Board were indeed reinstated: Dr. Walker in 1977 and the five civilians in 1989. All six are now enshrined on the official Medal of Honor Roll. (Reinstated awards: Amos Chapman, William Cody, William Dixon, James Dozier, Mary Walker, and William Woodall.) 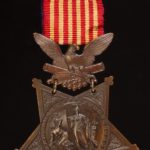