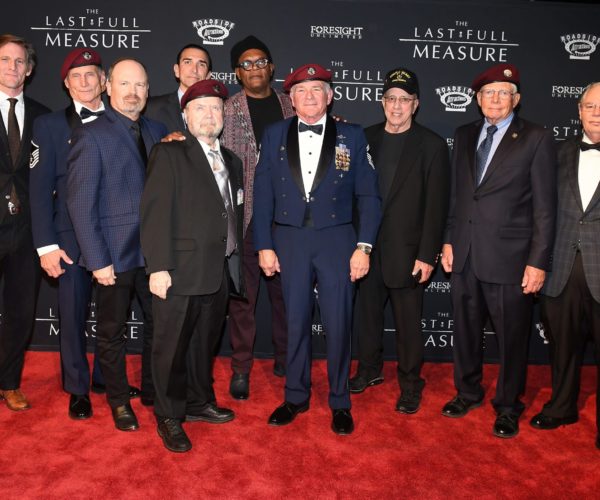 The Last Full Measure is an independent film based on Medal of Honor Recipient Airman 1st Class William Pitsenbarger and the men of Company C, 2nd Battalion, 16th Infantry Regiment, United States Army. A1C Pitsenbarger was posthumously awarded the Medal of Honor more than 30 years after his actions at the Battle of Xa Cam My in Vietnam.

For 20 years, the film’s production team worked with Veterans who witnessed A1C Pitsenbarger’s actions first-hand and family members to effectively capture his story and the events that occurred that day.

“When we started meeting the men of Charlie Company, the mud soldiers, and they were sharing with us their very personal stories about losing one of their fellow soldiers and dealing with the ramifications after the war, we saw that these men all had real stories that were highly emotional and had a piece of the puzzle to share,” says Sidney Sherman, Producer for The Last Full Measure. “Once we started meeting the men, we got hooked. We made a promise to them that, to the best of our ability, we’re going to get this done.”

Representatives from the Congressional Medal of Honor Foundation joined eyewitnesses of Recipient Pitsenbarger’s actions, his family members, as well as the film’s writers, producers, cast, and director Todd Robinson for a red carpet screening in Atlanta, GA.

The Last Full Measure accurately depicts the heroism and bravery of A1C Pitesenbarger, the men he fought beside, and the many people who fought to have his actions recognized with our nation’s highest honor.

“They’re telling the story that we’ve been telling forever. And it was really moving. I was in tears the whole movie,” says David Konz, grandson of Alice Pitsenbarger.

“This is one name. This is one man and his story. But you could write a book about each one of those names on the [Vietnam War Memorial] wall. They’re stories that need to be told,” says Konz.

A1C Pitsenbarger’s story continues to touch the lives of those who come in contact with it today. The film emphasizes how servicemen and women deal with PTS and the aftermath of combat every day. Sherman and director Todd Robinson hope the film will spark curiosity and compassion among viewers and encourage citizens to perpetuate the legacy of the Medal of Honor.

“If our film could do anything, it would be to make people think about the men and women who are serving on our behalf every day selflessly, never asking us for anything. It’s not just about buying them coffee or thanking them for their service. It’s really about coming up to them and asking if they’re okay or how can you help them,” says Sherman.

The Last Full Measure debuted in theaters on January 24th. Learn more about MOH Recipient William Pitsenbarger here. Donate here to help perpetuate the legacy of the Medal of Honor. The Congressional Medal of Honor Foundation is a registered 501(c)(3) non-profit organization with tax ID number 25-1828488. Stay connected with us every month by joining our monthly newsletter.