Twenty Years Since Sept. 11: Honoring Those Who Sacrificed Their Lives for Our Freedom 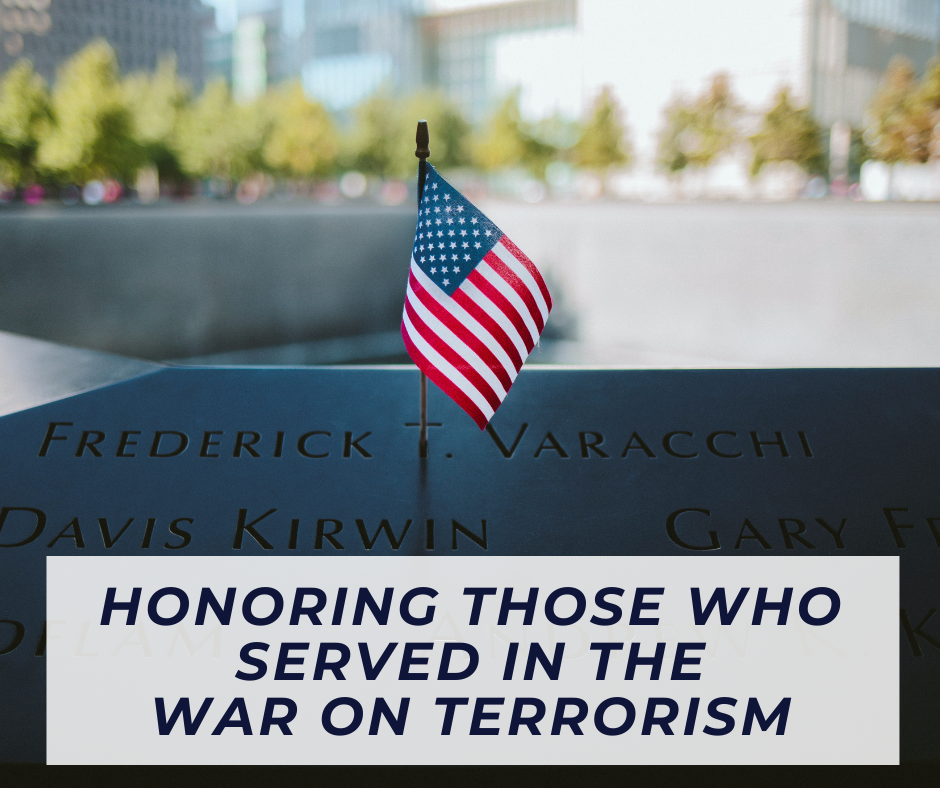 With the events currently taking place in Afghanistan, we recognize that this can be a difficult time for many. We honor the sacrifice and service of those who have bravely fought for our country and we stand in support and gratitude for our military and their families.

Twenty years have passed since Sept. 11, 2001. As we approach the anniversary of that day, we would like to take a moment to share the stories of those who made the ultimate sacrifice during the War on Terrorism in Iraq and Afghanistan. We invite you to read their stories below.

While serving in Iraq, Recipient Travis Atkins was notified about four suspicious individuals. He immediately moved his squad to search them. When confronting the individuals, he noticed that one was reaching for something under his clothes. Recipient Atkins knew that it was an explosive device. Realizing the severity of the situation, Recipient Atkins threw his body on top of the individual, shielding his fellow soldiers from the dangerous blast. We honor his steadfast devotion to others.

When his team stopped enemy vehicles to search them for weapons, Recipient Dunham was engaged in hand-to-hand combat. During the ensuing struggle, he saw a grenade being released. Without hesitation, he covered the grenade with his helmet and body, saving the lives of at least two fellow Marines.

While his crew was conducting combat control operations in an effort to reduce violence in Northeast Baghdad, Recipient McGinnis noticed a fragmentation grenade being thrown into his vehicle. Rather than leaping to safety, he made the courageous decision to protect his crew, saving four men from serious injury.

While providing early warning and stand-off protection from a rooftop in Ar Ramadi, Iraq, Recipient Monsoor displayed exceptional bravery in the face of danger. When a hand grenade bounced off his chest and landed in front of him, he chose to save the lives of his two teammates rather than escaping the blast.

While his Task Force was engaged in the construction of a prison of war holding area, they were violently attacked by an enemy force. Realizing the vulnerability of over 100 fellow soldiers, Recipient Smith quickly organized a defense. With total disregard for his safety, he maintained his exposed position in order to engage the enemy. His actions allowed the safe withdrawal of numerous wounded soldiers.

While serving in Afghanistan, Recipient Chapman showed incredible bravery on a rescue mission for one of his teammates in enemy territory. He fought relentlessly through severe, mortal wounds, sacrificing his life for the lives of his teammates.

While conducting a combat reconnaissance patrol, Recipient Miller and his team were engaged by the enemy. At the front of the patrol, he ordered his men to quickly move back as he charged the enemy in order to provide protective fire for his team. He ultimately saved the lives of seven members of his own team and 15 Afghanistan National Army soldiers.

While he was leading a mission aimed at gathering intelligence, Recipient Monti’s 16-man patrol was attacked by a large group of enemy fighters. When he noticed one of his soldiers had fallen between safety and the advancing enemy, he gave his own life in an attempt to rescue him.

During a mission to locate a high-level anti-coalition militia leader, Recipient Murphy displayed extraordinary courage in the face of danger. When his group of four was attacked by the enemy, he fought his way to open terrain to transmit a call, exposing himself to enemy fire. In a final act of bravery, he engaged the enemy, giving his life for the cause of freedom.

During the month of September, we remember and honor these men for their actions above and beyond the call of duty. Thank you to all those who risked their lives serving in both Iraq and Afghanistan.

If you are interested in learning more about Medal of Honor Recipients, we invite you to sign up to receive our monthly newsletter.