There are 19 double Recipients of the Medal of Honor, five of whom were awarded two Medals for the same action.  These five were Marines fighting with Army units and received both the Army and the Navy Medal. Matej Kocak and Louis Cukela were among these five; they were immigrants and friends.

Matej Kocak was born in 1882 in the town of Egbell in the Austro-Hungarian Empire, now Gbely, Slovakia. His parents were small land-owning farmers and, as he grew into young adulthood, he and his brother farmed alongside their father. Matej was a stubborn young man with strong opinions, often at odds with his father and the rest of the local community. One of the norms he had an especially difficult time accepting was the European belief in the absolute power and control of the parents, regardless of the age of the children. When he was 23 years old, Matej fell in love with a peasant girl and wanted to marry her. His father forbade the marriage, however, because the girl was of a lower social class.  After long and vehement arguments, Matej accepted he could not marry her and shortly thereafter, he packed his few belongings and left home. Several weeks later, Matej Kocak arrived in New York.

Kocak arrived with no money and no trade or skills with which to support himself. He traveled west and soon found work as a cook in a mining community near Pittsburg, Pennsylvania. He quickly decided, however, that he wanted more excitement and adventure out of life than cooking provided and the following year he joined the U.S. Marine Corps. For the next 11 years Kocak participated in military interventions in Latin America and the Caribbean, where his military skills were tested and honed. When the United States entered World War I, Kocak was part of the first Marine regiment to deploy. After initial training in the Gondrecourt region of France, the Marine regiments were incorporated into the U.S. Army 2nd Division and the unit moved towards St. Mihiel.

WWI introduced a new form of warfare, characterized by trenches in which the men from the opposing armies fought. Advances in technology introduced other modern weapons such as submarines, war planes and tanks, while improvements to the machine gun, grenade and artillery increased their effectiveness. The most feared weapon, however, was poison gas, which was especially deadly to the men in the trenches.  Even experienced combat veterans like Kocak faced weapons and situations new to them.

On one occasion, Kocak and a friend from his unit, SGT Louis Cukela, thought they heard an enemy patrol approaching from across No Man’s Land, the disputed area between the opposing trenches. They selected a mislabeled flare from the stock pile left behind by previous occupants of the trench and fired it off.  Instead of a white star burst intended to illuminate the area, the flare erupted into a green star, the signal for gas. The warning quickly spread down the trenches and men donned their masks and other protective gear until learning it was a false alarm.

On another occasion, Kocak intentionally gave a false gas-attack alarm. During a quiet afternoon, several men in the rear were visiting a Y.M.C.A. concession which sold snack food and cigarettes, staffed by an unpleasant and unpopular man.  Kocak came running into the hut calling, “gas! gas!” and the concessionaire immediately left to fetch his gear. When he returned, the soldiers were gone… as were all the chocolates and cigarettes.

In the spring of 1918, Kocak, now a sergeant, and his unit moved towards Paris, singing as they marched. Some of their favorites included Onward Christian Soldiers and crude versions of popular tunes such as Hinky Dinky Parlez Vous. The men were in good spirits and when they passed cemeteries, often joked about who would rest where when the battle was over. They were housed in the villages they passed through, the officers in homes and cottages, the soldiers in barns, lofts or wherever they could find a comfortable place to sleep.

In June, the Germans initiated a powerful drive into Allied territory. The Allies had been taken by surprise and confusion reigned; lines of communication were broken and no one knew where the enemy units were located. In a fortuitous breach of regulation, a frustrated soldier shot a pigeon with his pistol, intending to cook and eat it. As luck would have it, the pigeon was a carrier for the German army and carried information on the location of the enemy positions. Kocak’s unit, the 2nd Division, was diverted to meet the oncoming enemy.

At Belleau Woods in France the fighting was fierce. At the end of one especially difficult day, Kocak dropped into a shell hole and joined another soldier to sleep. In the morning, Kocak attempted to wake the other man and realized he was an enemy soldier and he was dead. Days later, Kocak’s and Cukela’s platoon was sent to seize and hold a wheat field beyond the woods. The men dug during the night and hid under blankets in sweltering heat from German airplanes during the day. When the enemy attacked, the Marines were ready for them.

Towards the end of June, the 2nd Division was relieved and sent to the rear for a much-needed rest. Rumors flourished that the Division would be sent home to train new recruits. Then, on July 15th, the Germans attacked along the Marne River and the 2nd Division moved north to join the 1st Division and the French 1st Algerians under General Foch in the Marne Salient.

In a surprise attack at dawn on July 18th, the Americans were at first successful, but once the enemy had time to organize, heavy machinegun fire held the advancing Allies. Through the mist and trees, Kocak saw a group of Germans and quickly identified them as the detachment guarding one of the machinegun emplacements. Alone, he crawled forward on his stomach, around their left flank, undiscovered until he had advanced quite close. With fixed bayonet he charged, killing one enemy and butting another across the head with the stock of his rifle. He drove off the rest and charged a second machinegun nest not far away. In the ensuing fire, his helmet was knocked from his head but he continued his charge until he was in the midst of them. Still alone, he held them off until Marines from his platoon arrived.

The prisoners were sent to the rear and the Marines continued their advance. In the hand-to-hand fighting that ensued, Kocak, again found himself alone. He intercepted some of the French Algerians who had lost their leaders and using hand signals organized them into a coherent unit which then captured two additional machineguns.

Meanwhile, elsewhere on the battlefield, Kocak’s friend SGT Louis Cukela also faced the enemy alone. Like Kocak, Cukela was an immigrant. He had been born in the Kingdom of Dalmatia, part of the Austro-Hungarian Empire, in what is now the city of Split, Croatia. In 1913 he immigrated to the United States with his brother, settling in Minneapolis, Minnesota. The following year he enlisted in the Army and was honorably discharged two years later. In early 1917, he enlisted in the Marine Corps and was assigned to the 5th Marine Regiment, the same unit as Matej Kocak.

At the Battle of Belleau Woods, Cukela was advancing with his company when they met strong enemy resistance. Alone, Cukela crawled out from the flank, through withering fire, to position himself behind the enemy emplacement. With fixed bayonet, he rushed the position, killing two and driving the rest of the German detachment away. He then used abandoned German hand grenades to eliminate the remainder of the strong point, capturing four enemy soldiers and destroying two additional machineguns.

Matej Kocak did not survive the war. He was killed in action on October 5, 1918, at the Second Battle of the Marne and is buried in the Meuse Argonne American Cemetery in France.

Louis Cukela participated in all the Marine battles from Belleau Woods to the Meuse River Crossing. In 1918 he returned to the US and served in the Marine Corps until he retired at the rank of Major in 1940. During the Haitian Campaign of 1919-1920, he was implicated in the execution of some prisoners in the center of a Marine camp. He was the focus of a Congressional investigation for which he received a reduction in rank and was reassigned to a different camp. He died in 1956 and is buried in Arlington National Cemetery in Arlington, Virginia. At the time of his death, he was the last surviving double recipient of the Medal of Honor. In addition to the Medal of Honor and the Medaille Militare, he was awarded the American Silver Star, and additional decorations from France, Italy and Yugoslavia.

Throughout his lifetime, Louis Cukela’s ethnicity was often challenged; he was called an Austrian, a Slav, a Yugoslav, a Serb and a Croat. His typical response was that he was an “American Marine.” 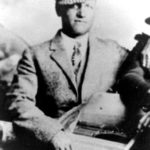 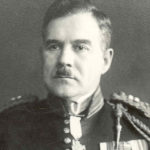 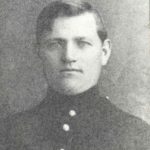 March is Greek American History Month. By way of commemoration of the contributions Greek-Americans have made to the United States, we invited educator and researcher Kris Cotariu Harper, EdD, to…