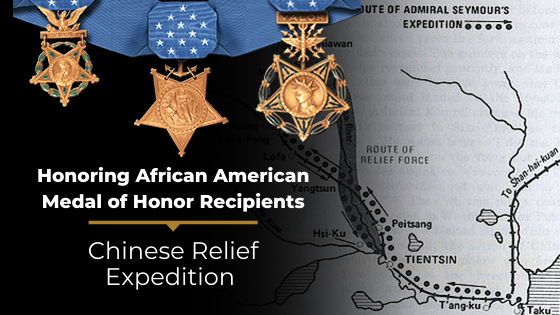 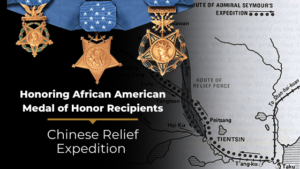 In this edition of recognizing African American Medal of Honor recipients, we are honoring Medal of Honor Recipient Frank Smith for his service during the Chinese Relief Expedition.

What was the Chinese Relief Expedition?

During the Boxer Rebellion of 1898-1901, the United States Armed Forces allied with eight other nations to defend U.S. citizens, European nationals, and other foreign nationals trapped in China. The Boxer Rebellion was an uprising near the end of the Qing Dynasty known for its anti-foreign, anti-Christian, and anti-imperialist objectives. Between 1900 and 1901 the U.S. contributed two warships and more than 3,400 soldiers, sailors, and Marines to the multi-national military response. The China Relief Expedition was designed to rescue non-combatants, but the focus shifted to suppressing the Boxer rebels. By 1902, the Boxer Rebellion had been effectively controlled in the city of Peking.

Recipient Frank Smith entered the US Navy at Virginia and served on the USS Newark. While in action with the Relief Expedition during the battles of 13, 20, 21, and 22 June 1900, Medal of Honor Recipient Oiler Frank Smith of the Allied Forces distinguished himself by meritorious conduct.

Stay connected with us every month and join our monthly newsletter. Donate today to make a difference! Your dollars help perpetuate the legacy of the Medal of Honor. The Congressional Medal of Honor Foundation is a registered 501(c)(3) non-profit organization with tax ID number 25-1828488.