On the morning of June 6, 1944, American, British and Canadian military forces landed on the beaches of Normandy, France. This would be the beginning of the end for Nazi Germany. Over 130,000 Allied service members participated in the five days it took to secure the beaches.

Brigadier General Theodore Roosevelt Jr. requested three times to lead the first wave of the assault on Utah Beach before permission was granted. Under a barrage of artillery fire, he proceeded to lead the men across the beach, returning for the ensuing units. He greeted each newly arriving regiment, pointing them towards their changed objective. His humor and confidence encouraged and inspired all, calming the nerves of the young troops.

Roosevelt had prepared for this day his entire life. The eldest son of President Theodore Roosevelt, Ted Jr. was born on the family estate in Oyster Bay, New York, in September 1887. Years later, reflecting over his childhood, he wrote that he

… I often walked to the office with [my father].  On the way down he would talk history to me-not the dry history of dates and charters, but the history where you yourself in your imagination could assume the role of the principal actors, as every well-constructed boy wishes to do when interested.  During every battle we would stop and father would draw out the full plan in the dust in the gutter with the tip of his umbrella.  Long before the European war had broken over the world father would discuss with us military training and the necessity for every man being able to take his part. (Mil. Hall of Honor)

Ted Jr. graduated from Harvard University in 1908 and entered the business world. He was extremely successful and accumulated a sizeable personal fortune which, in later life, he used to advance his political career. It was during this time that he and his three brothers attended General Leonard Wood’s military training camp for business professionals, the precursor to current day Army Reserves and the Reserve Officers Training Corps (ROTC).

Former president, Theodore Roosevelt, expected every young American man to be prepared to defend his country should the need arise and his sons met that expectation. When the United States entered WWI, the Roosevelt boys, along with their sister, Ethel, joined the military. The men all served in combat while Ethel was a nurse in the war zone. As a battalion commander, Ted Jr. took his responsibilities to his men so seriously that it is said he personally purchased a new pair of combat boots for every man in his unit. The youngest of the four Roosevelt brothers, Quentin, was killed in action during the war while Ted Jr. and brother Archie were both badly wounded. The effects of Ted’s wounds lasted through his life and, until the day he died, he used a cane to compensate for his injuries. By the end of the first world war, Theodore Roosevelt Jr. had been promoted to the rank of lieutenant colonel and was awarded the Distinguished Service Cross and the French Chevalier Légion d’Honneur.

After the war, Ted Jr. followed his father’s footsteps into American politics. In 1924, he ran for governor of New York but public disagreements with his cousin, Franklin D. Roosevelt, cost him the election and his relationship with his cousin. He served in the New York Assembly, as Assistant Secretary of the Navy, and later as Governor of Puerto Rico and Governor General of the Philippines. Shortly after FDR was elected president, Ted Jr. returned to the United States, knowing the new administration would install one of its own into his position. Again, he immersed himself in business and community enterprises. He remained active in the Army reserve service and was one of the founders of the American Legion.

In April 1941, he returned to active military service in the rank of colonel and was given command of the 26th Infantry Regiment, 1st Infantry Division, the same unit to which he had been assigned during the previous world war. Later that same year he was promoted to brigadier general. During his service in North Africa, Roosevelt gained the reputation as the general who preferred to lead from the front and was usually found on the lines with his troops. His propensity for unconventional behavior frequently left him at odds with his superior commanders, specifically General Omar Bradley and General George Patton; and while his courage in battle was indisputable, his adherence to military protocol and discipline was often called into question. Ultimately, Ted Jr. was relieved of command and assigned to a staff position.

During the Italian campaign, Roosevelt saw combat in Sicily and Sardinia, and served as Gen. Dwight D. Eisenhower’s liaison to the French Army. He regularly petitioned Eisenhower for another combat command and by June of 1944, Theodore Roosevelt Jr. was part of Operation Neptune, the naval component of the D-Day landings on the beaches of Normandy, France. His persistence led to his leading the assault on Utah Beach, the most southern of the landing sites at Normandy. These landings were far from perfect. At Utah Beach the tidal currents were so strong that the first twenty landing craft strayed two kilometers to the south of the expected objective. Roosevelt, as one of the first men off the boat, immediately assessed the revised situation and is said to have declared, “We’ll start the war from right here!” When General Barton, the commanding general of the 4th Division, came ashore, Roosevelt was there to greet him with reports of the situation. Barton later wrote,

while I was mentally framing [orders], Ted Roosevelt came up. He had landed with the first wave, had put my troops across the beach, and had a perfect picture (just as Roosevelt had earlier promised if allowed to go ashore with the first wave) of the entire situation. I loved Ted. When I finally agreed to his landing with the first wave, I felt sure he would be killed. When I had bade him goodbye, I never expected to see him alive. You can imagine then the emotion with which I greeted him when he came out to meet me [near La Grande Dune]. He was bursting with information. (Mil. Hall of Honor)

For gallantry and intrepidity at the risk of his life above and beyond the call of duty on 6 June 1944, in France…. His valor, courage, and presence in the very front of the attack and his complete unconcern at being under heavy fire inspired the troops to heights of enthusiasm and self-sacrifice. Although the enemy had the beach under constant direct fire, Brig. Gen. Roosevelt moved from one locality to another, rallying men around him, directed and personally led them against the enemy. Under his seasoned, precise, calm, and unfaltering leadership, assault troops reduced beach strong points and rapidly moved inland with minimum casualties.

Thirty-six days later, on July 12, 1944, Theodore Roosevelt, Jr. died in his sleep of a heart attack, at the age of 56. General Omar Bradley later said Roosevelt’s action on Utah Beach was the bravest thing he had ever seen, and, in a letter to his wife, General George Patton wrote, “He was one of the bravest men I ever knew.” 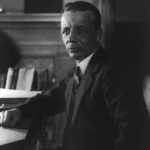 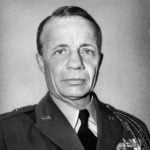