As Civil War battles go, the skirmish at Cosby Creek in eastern Tennessee barely merits discussion in any history book. Even serious Civil War scholars will have a difficult time coming up with much information about it. Situated on the edge of what today is the Great Smoky Mountains National Park, the town of Cosby itself was one of the first settlements in Tennessee, and even today is noted more for good trout fishing than anything historical. In fact, Cosby’s chief claim to historical fame has long been related to its main farm crop: corn. Not corn for eating at picnics, or even for providing feed for farm animals. The corn grown in Cosby had another purpose as the prime ingredient in a different commodity, giving rise to Cosby’s unofficial title as the Moonshine Capital of the World. So what, then, made it significant in 1864? The skirmish resulted in few casualties, but one of those captured was Confederate Brigadier General Robert B. Vance. His capture by an enlisted man resulted in his captor being awarded the Medal of Honor. Here is the fascinating story.

On a cold winter morning, Sgt. Everett W. Anderson of the 15th Pennsylvania Cavalry found himself with the rest of his Company M, foraging in the Sequatchie Valley of Tennessee. It was January 14, 1864, and a messenger had just delivered word to the commander, Colonel William I. Palmer, that Confederate Brigadier General Robert B. Vance had just captured a wagon train carrying badly needed supplies for the Union army near Sevierville. Along with the supplies, more than 200 Union soldiers and an unknown number of Union-sympathizing private citizens had been taken captive. General Vance was believed moving toward Asheville, North Carolina.

Colonel Palmer knew little about Vance or what his troop strength may be. He had heard Vance’s name mentioned after Murfreesboro, where the Confederate had taken over command of the brigade of James E. Rains when Rains had been killed. Beyond that, and having heard that Vance’s horse had been killed under him at that same battle, Vance presented a mystery. Palmer was unaware that Vance had been afflicted with typhoid fever shortly after Murfreesboro and had been forced into a long recovery, accounting for the lack of information available to Palmer. Vance’s absence from the army had only recently ended, and unknown to Palmer, Vance’s orders were to harass Union flanks and disrupt the flow of northern supplies, thus explaining his capture of the wagon train.

Palmer ordered his men to abandon their foraging and prepare to seek out Vance, and soon Company M and Sgt. Anderson were on their way. Northern sympathizers aided in directing the 15th Pennsylvania Cavalry, and even went so far as to block Vance’s route by cutting large trees down across the road he was taking. Before long, the Union cavalry overtook the Confederates. Palmer detailed a party of 20 men to mount a charge through Vance’s rear guard, which would be followed by a more general charge. Both assaults wee successful and the wagon train was recaptured.

Meanwhile, Sgt. Anderson had taken a squad of 20 men and set up an aid station for the wounded, but in the process many of his men had become scattered. As Anderson knelt beside a wounded man to render aid, one of those scattered men returned and informed Anderson that a group of five Confederates had been observed stealthily slipping around the rear of the Union troops. Anderson immediately mounted his horse and cut off the escape.

Wielding his pistol, he was surprised to see that one of the five was a general officer. Anderson shouted out a command for the five to stop and surrender. As Anderson pointed his pistol menacingly at the general, the five decided that it would be futile to try to escape. The general, later identified as Vance, glowered at his captor, then reluctantly dropped his weapon to the ground. The remaining four captives followed suit.

It would not take long for word to reach Colonel Palmer that a Confederate general had been captured, and he hastened to the scene. Reaching Anderson and his five unhappy prisoners, Palmer sharply saluted General Vance and extended his hand, saying, “I am happy to meet you, General Vance.” Vance barely looked up as he answered, “Much more so than I am, under the circumstances.”

Vance would be sent to a prison in Nashville, and from there he would spend the next several months moving from prison to prison. Finally, a minister who had been a former prisoner of Vance’s recalled that Vance had treated him kindly. The minister returned the favor by intervening on behalf of the general, eventually obtaining his release. President Lincoln granted Vance a special parole, then, on March 10, 1865, extended that to a full pardon under the proviso that Vance never fight again. Vance would go on to serve in both the United States Congress and the North Carolina General Assembly.

On December 3, 1894, Everett Anderson was presented with the Medal of Honor for his feat. He would pass away on February 4, 1917, and be buried in Morris Cemetery in Phoenixville, Pennsylvania. 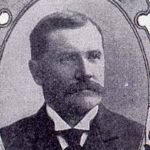 Following the defeat of the Confederate army at Lookout Mountain, Tennessee, on November 24, 1863, Confederate General Braxton Bragg reassembled his troops on nearby Missionary Ridge. Rising some 330 feet…