May is Asian-Pacific Heritage Month. In commemoration, we honor Jose Nisperos, the first Filipino Medal of Honor Recipient, who received the Medal for the defense of his military detachment and his commanding officer.

“It is with pride and gratification that I grasp with sincere congratulation your remaining hand – the hand of a brave and unselfish comrade.” Major General J. Franklin Bell to Jose Nisperos, when presenting the Medal of Honor, February 3, 1913

The Philippines at the Beginning of the Twentieth Century

To understand Jose Nisperos, one first has to understand some of the world he knew: a country of near-constant conflict among native and foreign powers.

Perhaps understandably, the revolutionaries were not pleased to trade control of their lands to yet another foreign power. The rebellion broke out again in 1899 and wasn’t suppressed until 1902.

Various groups of revolutionaries and ethnic groups continued resisting U.S. control during and after these larger-scale events.

By the time 20-year-old Jose Nisperos joined the U.S. Philippine Scouts in 1907, he no doubt had been exposed to a great deal of turmoil.

The unit he joined, the Philippine Scouts, were a part of the regular U.S. Army consisting of mostly Filipinos and Filipino-Americans. Their primary objective was to restore order to the Philippines.

Nisperos’ first enlistment ended in 1911, but he signed up again a few months later, giving his occupation as “soldier.” It was during this second enlistment that his moment of valor occurred.

In the early morning hours of September 24, 1911, an eight-man detachment was sent on an expedition to search for insurgents on Basilan Island. Working in concert with a larger Philippine Scout force, this detachment was commanded by Ensign Charles Hovey, and consisted of Nisperos as an interpreter, five enlisted men from the U.S.S. Pampanga, and a local guide.

When the detachment came under attack, Hovey, Nisperos, one of the enlisted men, and the guide had been reconnoitering ahead of the other four men in the group. The guide was killed immediately and Hovey mortally wounded. Nisperos was speared through his body and shot above his left elbow, shattering the bone. He shielded his wounded commander with his own body, aiming for the attackers with his rifle while digging the stump of his arm into the ground for balance. When medical help arrived, Nisperos insisted his commander be the first to receive aid.

A Medal for Valor

Nisperos and the five enlisted men survived the encounter, but Nisperos lost his left arm. He was honorably discharged for disability in the summer of 1912. For their parts in the action, the five men from the Pampanga received the Medal of Honor in January 1912: Fred H. McGuire, Jacob Volz, John H. Catherwood, Bolden R. Harrison, and George F. Henrechon.

Second Lieutenant Arthur Cody, who was commander of the larger Philippine Scout force out that day in September 1911, recommended Nisperos for the Medal on March 19, 1912. At first, a lack of sworn eyewitness testimony held up the nomination – the others involved had left the area or the Naval service. Eventually, the War Department agreed to award the Medal of Honor to Nisperos, largely on the endorsements of his direct superiors and the affidavits used to award the Medal to the other five men.

On February 3, 1913, Nisperos was awarded the Medal of Honor. Newspapers reported that over 5,000 people were present for the event, including three battalions of Philippine Scouts and nearly all the U.S. military officers in the area. Major General J. Franklin Bell (himself a Medal of Honor Recipient) praised his actions, saying:

“The possession of such courage as you displayed on that occasion is not a common virtue. In the presence of excruciating pain and sudden death you preserved sufficient coolness to recognize appalling disaster and possessed that quality of courage, which, rising sublimely above fear and pain, enabled you to forget self and think only of your duty.”

At the conclusion of those remarks, Bell’s wife stepped forward and decorated the first Filipino soldier to receive the Medal of Honor.

At the time of the Medal of Honor presentation, Nisperos had been appointed as a deputy sheriff in Basilon by the commander of the 28th Infantry. He also had been awarded $55 per month for his disability pension.

He died of illness in his hometown of San Fernando on Luzon in 1922, at only 34 years old. Not long after, someone promising to help his widow obtain benefits took the Medal of Honor from his family. The next time they heard of the Medal was in 2010, when it was auctioned in Manila.

His great-granddaughter began a mission to recover this piece of family history, petitioning veteran groups, American diplomats, local authorities, reporters, and placing pleas on social media. On June 7, 2012, her efforts paid off: the Medal’s buyer returned it to the Nisperos family.

Today, Nisperos is remembered as the man Major General Bell described at his Medal of Honor presentation: “a man of few words but [whose] character as a soldier … never failed to be exhibited by acts.” 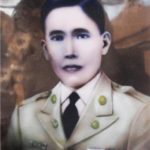