Today, February 26, 2021, is the 50th anniversary Medal of Honor Recipient Jon Swanson‘s heroic actions. Sadly, it is also the anniversary of his death; he gave his life to save others.

We asked Will Clemmons, a history major at Charleston Southern University and current Congressional Medal of Honor Society intern, to write the following in remembrance of Captain Swanson.

Sandee Swanson never knew her husband Jon E. Swanson was recommended for the Medal of Honor. It wasn’t until her daughters uncovered a card in 1998 indicating he was recommended that a real effort was made to get their father the medal he deserved. This work culminated in a 2002 award ceremony where George W. Bush would finally give Swanson’s family the medal their father rightly deserved.

Born in San Antonio, Texas, Jon Swanson grew up in Denver, Colorado. Sandee Swanson dated him on and off throughout high school, remembering their summers spent together at the Swanson cabin.

Upon graduation Jon went to Colorado State University, where the joy of flying convinced him to join the Army ROTC. Jon and Sandee kept in touch as she worked for the Peace Corps in the Philippines. In 1967, they married after Jon took a break from his first Vietnam war tour. Soon after they would settle in Boulder, Colorado, and have two daughters.

Jon Swanson would meet his final battle on a second combat tour in southeast Asia. Having become a helicopter pilot, he was assigned to be a scout.

On February 26, 1971, Swanson would “distinguish himself by conspicuous gallantry and intrepidity involving great risk of his life in action against armed enemy aggressor forces.” As a OH-6A Cayuse light observation helicopter aircraft commander, he was tasked that day with reconnaissance support for Task Force Three Thirty-Three. In Kampong Cham Province, Cambodia, there was known to be well-equipped North Vietnamese Army regiments, and Swanson’s task was to pinpoint their positions. This required him to fly at low speeds, making his aircraft especially vulnerable to enemy fire.

Evading intense enemy fire, Swanson successfully took out multiple anti-aircraft units with grenades and his machine gun. Having run out of sufficient armaments to destroy a final anti-aircraft unit, he flew over and dropped a smoke bomb so the Cobra gunship could take it out. Having sustained damages, Swanson landed his helicopter to assess damages inflicted. He noticed the gunship had yet to take out the position he had marked, and an enemy soldier was crawling to man the spot. Without second thoughts, he engaged and killed the enemy, then hopped back in his helicopter to drop another smoke signal.

Still under heavy fire Swanson volunteered to continue his mission, heading towards yet another anti-aircraft unit. Grievously, he never made it to the next unit bunker; his helicopter had sustained too much damage, and it exploded.

Jon Swanson’s disregard for his personal well-being in pursuing a greater good is a reminder of the heroism we can all attain if we have the courage to pursue higher callings. That he did not receive the Medal of Honor promptly upon his death is a tragedy that happily ended as only a temporary mistake, thanks to the efforts of Swanson’s family, who because of their love upheld their father’s just merit to receive the Medal of Honor.

Swanson was lost to the war until decades later when a recovery mission successfully located his remains. In May 2002, Sandee finally found some peace at his burial at Arlington National Cemetery, knowing her husband was not only her hero, but now America’s as well. 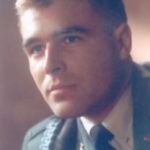