Get to Know Jose Calugas this Filipino-American History Month

Filipino American History Month is celebrated in October to commemorate the first known presence of Filipinos on the American continental United States—1587. Since then, Filipinos and their descendants have been woven into the American fabric, including military service.

To date, there are four known Medal of Honor Recipients of Filipino descent: Telesforo Trinidad, Jose Nisperos, Rudolph Davila, and the subject of this article, Jose Calugas.

“I cannot say that I am not afraid with faced with danger… Yes, I am afraid, but not so frightened that I lose control” … “That is still my motive in life … not to depend on help coming from someplace else.” ~Jose Calugas [Filipino Scout Took Over Battery Despite Rain of Japanese Shells, The News Tribune, Tacoma, Washington, January 16, 1969, pg D-2.]

Jose Calugas was born into a large peasant family in Leon, on Panay Island in the Philippines in 1907. By his own admission, he found life there boring, and so he signed up for the U.S. Army’s Philippine Scouts before he had finished high school.

Calugas was serving as a mess cook for Battery B, 1st Battalion, 88th Field Artillery, detailed at a battery gun position near Culis, Bataan Province, Philippine Islands, on Jan. 16, 1943. At 2 a.m., the Japanese began an attack on his unit’s position. Twelve hours later, Calugas noticed that the crew of one of the guns was out of commission. He organized a new group willing to run through 1,000 yards of withering fire to operate the gun. All but four were forced back. Calugas then effectively led the surviving group through the gun’s operation, even though their position was subject to heavy Japanese artillery fire.

The fight was so intense and wide-ranging that Calugas would later say that he was glad that his wife and three children had already left the area to return to his hometown on Panay to wait out the war.

A month later, on Febr. 17, 1942, the U.S. Department of War announced he would receive the Medal of Honor for his actions that day.

However, fate had a different turn in mind. As the Philippines fell to the Japanese in early 1942, Calugas was trapped with other American soldiers. They were forced to undertake the Bataan Death March, a grueling march over 60 miles in which prisoners of war endured beatings, starvation, and random killings.

When Calugas was taken as a prisoner, he and his fellow soldiers carefully guarded the secret of his Medal of Honor award so that he wouldn’t be singled out for harsher punishment or death. He survived the March but contracted malaria, which he cleverly used to disguise himself from his captors, pretending his illness lasted longer than it did so the Japanese would not look too closely at him.

When he was released from the camp to a Japanese labor farm, he acted as a spy for the local guerrilla resistance movement and later joined them as a fighter.

Calugas resumed his American service when American troops returned to the area. On April 30, 1945, he was finally presented the Medal of Honor at Camp Olivas in the Philippines by Maj. Gen. Richard Marshall.

After the war, the U.S. offered citizenship to those who fought in the Philippine Scouts as a reward for their service. The offer included a waiver of residency and examination requirements. Calugas jumped at the chance. In 1955, still in service, he was transferred to Fort Louis, Washington. He slowly brought the rest of his family over to the U.S., one-by-one. By 1963, his wife and four children had immigrated, and his four children later also became citizens.

When he retired from the Army in 1957, Calugas had risen to the rank of Captain. He subsequently lived in Tacoma, Washington, and earned a degree in business administration from University of Puget Sound. He worked for Boeing Company until 1972. In the summers, he farmed a small plot of land just outside of town.

Jose Calugas died on Jan. 18, 1998, in Tacoma, and he was interred at Mountain View Memorial Park. His Medal of Honor is preserved at the Fort Sam Houston Museum in San Antonio, Texas. 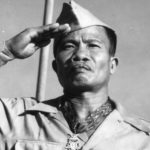 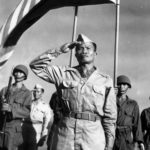 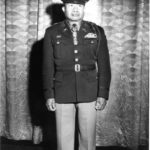 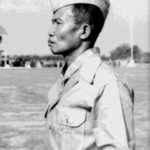 By Laura Jowdy, Archivist & Historical Collections Manager, CMOHS Countless service members of Hispanic or Latino heritage have served in the U.S. Armed Forces, and 59 are known to have…

On National POW/MIA Recognition Day we honor all those who were prisoners of war and those missing in action while defending the United States. Thousands of U.S. service members remain…