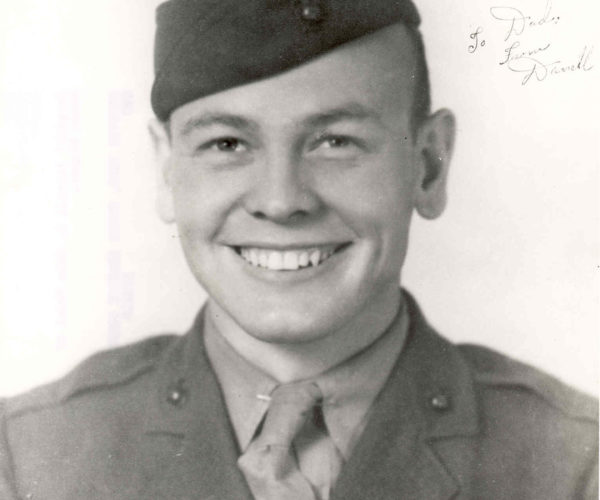 During World War II, when U.S. Marines landed on Iwo Jima on February 19, 1945, they found the Japanese forced well-entrenched. It took the Marines 36 days to take the island and claim its two airfields for the continuing war efforts against Japan. Twenty-seven Medals of Honor would be awarded for the ferocious battle over the tiny, 8-square-mile island.

By way of commemoration of these Marines, we invited educator and researcher Kris Cotariu Harper, EdD, to write a memorial piece on one of them: Darrell S. Cole, a 24-year-old newlywed with a sense of humor.

The morning of October 12, 2000, I was attending an international women’s conference in L’viv, Ukraine, when hushed voices started talking about a U.S. naval ship having been attacked in the eastern Mediterranean. Our small group of Americans were anxious for information but with limited, at best, Russian language ability amongst us, we had to wait for our interpreters to arrive. That ship was the USS Cole (DDG-667) and the attack, it was later learned, was by the Muslim extremist group al-Qaeda. Seventeen American sailors were killed and another 39 were wounded. I later learned USS Cole was named for WWII Medal of Honor recipient, Sergeant Darrell S. Cole.

Darrell Cole grew up in Flat River, Missouri, and enjoyed all the childhood activities common at that time. In addition to his sport activities and school clubs, he became enamored with music and the French horn in particular. He became so skilled at playing the horn, in fact, that when he enlisted in the Marine Corps Reserve in the spring of 1941, he received the rate of Field Music, which he immediately appealed. His friends in the Marine Corps often heard him complain that he had joined the Marines to fight; he wanted to be in the infantry, not the band.

In August 1942, Cole participated in the assault on the beaches of Guadalcanal with the 2nd Battalion, 1st Marines in the first American offensive of World War II. When a machine gunner from his company fell wounded, Cole assumed the gunner’s position in the line and continued the fight, later receiving praise from his commanding officer for his actions in combat. After the battle he submitted a request to have his rating changed from field music to machine gunner but was denied “due to a shortage of field musics” in the Marines.

Not long after the Battle of Guadalcanal, Darrell Cole began to write his memoirs. He wrote, “I was a foot-loose vagabond before enlisting in the Marine Corps. I have tried my hand at doing nearly everything, and succeeded at nothing….”  He recorded that he had burned down the barn with his brother Stanley when he was three years old and had run away from home when he was 10. He included jobs he had held and activities in which he had participated while in high school and junior high and that he had joined the Civilian Conservation Corps (CCC) when he was 17. Cole listed several different jobs he held in the CCC and buried within the list he wrote, “organized a revolt in camp.… Got honorable discharge to accept outside employment.”

After his 14 months in the CCC, Cole held a series of jobs including sales, tractor driver, and “all night work in Kansas.” He became active in his church where he “was superintendent of Sunday School, and was president of B.Y.P.W. [a church-affiliated organization], sang in choir, quartet of the church.” Cole went to Michigan where he worked as a truck driver and store room clerk, as well as a bell boy and trouble shooter in a hotel, and also in a manufacturing plant.  He became a part of Americana history by becoming a 1930s hobo “[traveling] over nearly all states in Union by riding freights.”

In the spring of 1941, Cole decided to enlist in the Marine Corps. He wrote:

“Becoming too fond of wine, women, and song made good money, but night clubs got most of it. Wasn’t getting anywhere, so enlisted with … home town friend.  Had quite a time in Boot Camp. I joined to fight, and was put blowing a bugle.  There is a right way, and Marine Corps Way, naturally it’s easy to see which way we go.”

After boot camp, Cole was assigned to a field unit and began the cross-country train trip for deployment to the Pacific Theater of the war. He wrote of the huge send-off at the train station as the band played popular military tunes but “there was no girl friends or any of our folks because of military secrecy, only buddies in other outfits … waving and hollering at the top of their voices.” After arriving in San Francisco, he boarded the USS George F. Elliott, the ship that carried him to Guadalcanal.

The first stop the USS Elliott made in transit to Guadalcanal was Wellington, New Zealand, where, for two weeks, Cole “worked the hardest [he] ever did in [his] life.” He enjoyed what liberty he was allowed and the new experiences a foreign country offered. He was especially interested in the English money and enjoyed teaching the local girls American slang. The second and final stop was in the Fiji Islands for three days of training in landing maneuvers. Here the USS Elliott joined with the rest of the task force and headed for its final destination.

“Finally, the night before, Colonel Cates, our battalion commander, made a speech over the loud speaker of the ship. Lot of bull shit. About how we were picked to start the first American offensive in this war, that Marines were picked to do it – etc., so on. The whole group sang Marines Hymn, which did help to settle nerves…. the sailors wished us good luck…”

Cole recorded his experiences in combat in graphic detail, what he had seen and friends he had lost. He recorded that “[He] didn’t believe there is a man who can tell 1/10 of what happened down there. Something was happening every minute. And no one will ever know the thoughts, ideas that a man gets in a hell like Guadalcanal was.” After contracting a bad case of malaria, Cole was returned to the United States where he disgustingly wrote, “After all that, get in the States, and have some guy ask you if you knew there was a war on, cause you asked for two packs of gum…”

After recovering from malaria, Darrell Cole married Margaret Belle Willett and, less than one month later, returned to combat in the Pacific Theater with the 4th Marine Division. He never again wrote in his journal or, if he did, the journal did not survive.

With the 4th Marines, Cole participated in combat in the Marshall Islands during which he again abandoned his bugle for a fallen Marine’s machine gun. As the Division approached Saipan, in the Marshall Islands, four months later, Cole, still designated a field music, was assigned to a machine gun and based on his previous performance in combat, was selected to be section leader. When his squad leader was killed, Cole, in spite of his own wounds, assumed command of his squad. He was fast earning the reputation and nickname of the Fighting Field Music and after each of these engagements, applied for a change in his designation. At the completion of the Marianas Islands campaign he was finally granted his request and on February 19, 1945, Sergeant Darrell Cole led his section of machine gunners ashore in the assault on Iwo Jima.

Before the landing was even completed, their advance was halted by withering fire from two Japanese pillboxes. Cole evaluated the situation and then, crawling forward, eliminated the threat with hand grenades. As the section continued to move forward, they were again held up by enemy fire coming from three different positions. Cole was able to silence one position before his machine gun jammed. Once again, he crawled forward in a solitary attack on the final two positions, armed only with a pistol and a single grenade. Twice he returned for additional grenades before he achieved success and upon returning to his own lines for the third time, was immediately hit and killed by a grenade. His heroic actions, however, allowed his company to reach their ultimate objective.

The Medal of Honor was presented to Sergeant Darrell Cole’s widow on April 17, 1947. He was buried in the 4th Marine Division cemetery on Iwo Jima but was later re-interred in the Park View Cemetery in Farmington, Missouri.

Thinking about Darrell Cole always makes me smile. He demonstrated a joy of life and a self-deprecating sense of humor as well as unmitigated courage and determination.  He was just 24 years old when he made the ultimate sacrifice – part man, part boy. 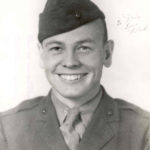