March is Greek American History Month. By way of commemoration of the contributions Greek-Americans have made to the United States, we invited educator and researcher Kris Cotariu Harper, EdD, to write a memorial piece on one of the two known Greek-American Medal of Honor Recipients: George Dilboy.

(Bonus Knowledge: The other Greek-American Medal of Honor Recipient is Demetri Corahorgi.)

Anton Dilboy reportedly told his son, Medal of Honor recipient George Dilboy, “Go! Hurry and enlist and come back with your shield, or on top of it. I care not which.” With these words, the senior Dilboy referenced the legends of the Spartans of ancient Greece, as they fare-welled their sons off to battle. The message was clear: Come back victorious or die honorably in battle. By the age of 22, George Dilboy had fought in four wars on three continents, but in the end, returned home “on top of his shield.”

George Dilboy was born in February 1896 in the Greek community of Alatsata in Asia Minor, current day Turkey. Ethnic conflicts were common in the area, and because of the continued persecution of ethnic Greeks by the Turks, the Dilboy family immigrated to the United States when George was 10 years old. Two years later, the family moved from Keene, New Hampshire to Somerville, Massachusetts.

In 1912, when Dilboy was 16 years old, he returned to Asia Minor to fight with the Greek forces in the Balkan Wars of 1912 and 1913. At the end of the wars, he returned home to Massachusetts and soon after, joined the New Hampshire National Guard to fight in the conflict on the Mexican border. At the end of his enlistment, Dilboy again returned to Massachusetts, and when the United States entered World War I enlisted in the U.S. Army in Boston, MA.

Dilboy sailed for France with the 103rd Infantry, 26th Division, and participated in the Champagne-Marne defensive and in the Aisne-Marne counter offensive.

In July 1918, Company H of the 103rd Infantry was engaged at the Battle of Belleau Woods. The company reached the rail tracks that were their objective, but at that point, eyewitness reports of the sequence of events, dated 1922 through 1936, conflict. The official record of his moment of valor is recorded in his Medal of Honor citation. It reads:

“PFC Dilboy, accompanying his platoon leader to reconnoiter the ground beyond was suddenly fired upon by an enemy machine gun from 100 yards. From a standing position on the railroad track, fully exposed to view, he opened fire at once, but failing to silence the gun, rushed forward with his bayonet fixed, through a wheat field toward the gun emplacement, falling within 25 yards of the gun with his right leg nearly severed above the knee and with several bullet holes in his body. With undaunted courage he continued to fire into the emplacement from a prone position, killing two of the enemy and dispersing the rest of the crew.”

It was said he died with a smile on his face.

Private George Dilboy was recognized by General John Pershing, commander of the American Expeditionary Force (AEF), as one of the 10 most outstanding soldiers of the First World War. In later years, Colonel S. M. Shumway, his company commander, wrote:

“It was one of the most impressive sights I experienced in the War. George Dilboy died facing the enemy, carrying on as long as there was the faintest whiff of breath in his body. He routed the enemy alone. He was as fine a soldier as ever served under the Stars and Stripes.”

When Dilboy’s father was presented his Medal of Honor early in 1919 he remarked:

“In other circumstances I would have shed tears because of my son’s death but when I learned of the manner in which he died, I was proud that he had given his life with honor to the cause of his adopted country, the United States.”

George Dilboy was buried in the Aisne-Marne American Cemetery in France but, when Alatsata, his place of birth, was briefly reclaimed by Greece in 1922, his father wanted Dilboy re-interred there.

In Alatsata, thousands of people lined the streets as his American flag-draped casket was carried to the Greek Orthodox Church of the Presentation of the Theotokos where it lay in state. Before burial could occur, however, Turkish soldiers returned to the city, desecrating the church, seizing the American flag, and scattering the bones of George Dilboy. The United States was outraged that our hero would be treated in such a manner and the incident was elevated to an international issue.

An American naval task force was dispatched to the coast of Turkey to retrieve the remains of this young hero. The landing party was respectfully saluted by the Turkish honor guard detailed to escort Dilboy’s casket.  As the casket, now covered in a new American flag, was transferred to the USS Litchfield, both detachments, American and Turkish, rendered full military honors and the Turkish government offered an official apology to the United States. In November 1923, George Dilboy was reinterred in Arlington National Cemetery, Arlington, Virginia.

Private First Class George Dilboy was honored by three presidents: Woodrow Wilson authorized his Medal of Honor; Warren Harding ordered the U.S. war ships to recover his remains and demanded a formal apology from Turkey; and Calvin Coolidge presided over his final burial in Arlington.

George Dilboy continues to be celebrated in Greek communities around the United States. In his adopted hometowns of Keene, NH, and Sommerville, MA, the Veterans of Foreign Wars (VFW) posts are named for him.

Among other monuments around the country, a memorial tablet is displayed in the Massachusetts State House and a bronze bust graces the front of the Somerville City Hall. While visiting my grandmother when I was a child, I swam in the Dilboy Memorial Swimming Pool in Somerville, MA. 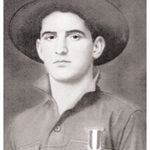