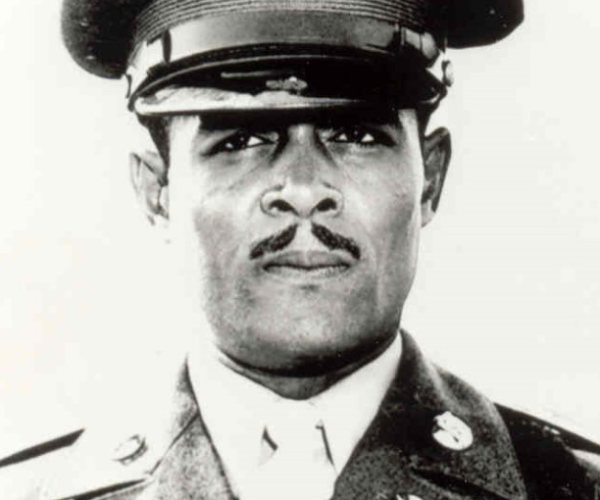 By way of commemoration of these Soldiers, we invited educator and researcher Kris Cotariu Harper, EdD, to write a memorial piece on one of them: Edward A. Carter, Jr.

“A soldier who receives the Medal of Honor usually needs no further description. But we must remember something else here today. These heroes distinguish themselves in another almost unique way. In the tradition of African-Americans who have fought for our Nation as far back as Bunker Hill, they were prepared to sacrifice everything for freedom even though freedom’s fullness was denied to them.” (William J. Clinton, Remarks on Presenting the Congressional Medal of Honor to African-American Heroes of World War II, 13 January 1997)

The story of Staff Sergeant Edward Carter includes a fascinating childhood, a heroic military career, and a tragic end-of-life.

Edward Carter had a most unusual early life. He was born in Los Angeles, California, in 1916 to missionary parents, a Black American father and an Anglo-Indian mother from Calcutta, India (now known as Kolkata). When he was nine years old, his family moved to Calcutta to start a church. He had a difficult relationship with his father and ran away from home twice. It was while living near a military base as a child in Calcutta that he became enthralled with the army and envisioned himself a great warrior who survived many wounds.

Carter’s father was forced to return to the United States when his wife ran off with the church treasurer, taking the church money with them. During a scheduled stop in Shanghai, China, on the return trip home, the family was forced to leave the ship because it was suspected that the younger son, William, had typhoid. While William recovered, Carter’s father integrated himself into the missionary community in Shanghai. Eventually, perhaps to tame his rebellious nature, young Edward Carter was enrolled in the Chinese Military Academy.

The 1920s were dangerous times to be in China: in addition to the perpetual threat of famine, there was constant danger of violence by gangs and guerrillas, and civil war loomed. During this time, the Carter family socialized at the highest echelons of Chinese society. Among their intimates were the wife of Chaing Kai-shek, the leader of Nationalist China; her brother, the former prime minister; and her sister, the wife of another government minister. In addition to these three, the middle daughter of this family became the vice chairman of the People’s Republic of China after Mao Tse-tung came to power with the Communist victory in the civil war.

In 1932, when the Japanese attacked Shanghai, young Carter volunteered to fight alongside the Chinese and British forces. After serving for one month on the front lines, he had reached the rank of lieutenant, but due to his father’s intervention, was sent back to the academy because he was only 15 years old. Three years later, he appealed to the American consulate in Shanghai to fight the Italians in Abyssinia (current day Ethiopia) but was denied. Instead, he was offered a job in the Merchant Marines, which he accepted.

With the Merchant Marines, Carter eventually returned to Los Angeles, but in the 1930s, work was hard to find, particularly for a young Black man. His attention was caught by the war in Spain, and using the connections he had made in the Merchant Marines, he traveled to join the forces of the Second Spanish Republic in the Spanish Civil War. Carter signed up with the socialist Abraham Lincoln Brigade (an organization comprised of American volunteers), where his training at the military academy and his combat experience in China made him better prepared than most others. He was wounded and captured, but escaped and rejoined his unit. In 1939, however, Francisco Franco and the Nationalist party, supported by Nazi Germany and Fascist Italy, won the war and Carter returned to California. Within the year, he met and married Mildred Hoover, a beautiful young widow who eventually became the first Black violinist to perform with the Los Angeles Philharmonic Orchestra.

Carter’s ambition in life was to be a soldier and it was this self-image, born when he was still a child, that inspired him to enlist in the segregated American Army in the fall of 1941. It is an unfortunate fact of history that he faced severe racism throughout his training period in the southern states as well as in his military units abroad.  In spite of his often-expressed bitterness towards his situation, however, he excelled in all manner of military skills, cherished his life in the army, and quickly rose to the rank of Staff Sergeant.

As World War II progressed and the need for trained infantrymen became urgent, Black soldiers, previously relegated to support services, were recruited for all-Black infantry units commanded by white officers. Carter immediately volunteered, and like all Sergeants, was accepted on the condition he agree to a reduction in rank to Private. In his new unit, Carter’s proficiency was quickly recognized, and he was the first Black volunteer to be made squad leader. His company commander later wrote, “[we] were trying to develop leaders for the squads. We promoted several of the Black soldiers. Carter was the first one. He was the ideal soldier…. He was one of the best leaders we had in that company.”

In March 1945, Carter’s unit pushed across the Rhineland and joined the attack on the city of Speyer, Germany. Faced with opposition fire from a large warehouse, he volunteered to lead a three-man team to scout the area ahead. Almost immediately, two of the men were killed and the third was wounded. Carter proceeded alone despite his own wounds. He approached to within 30 yards of the target area and was forced to seek cover, where he stayed for two hours. When an eight-man German squad approached his position, Carter opened fire, killing six and capturing the remaining two. He had single-handedly eliminated the last German obstacle to the American advance.

Carter’s superiors were so impressed by his actions that they discussed a nomination for the Medal of Honor. They decided in favor of the Distinguished Service Cross, however, because of concern that the Medal of Honor would not be approved for a Black soldier.

With the end of the war, Carter returned to the racially segregated United States and its associated discrimination. In a letter to his wife he wrote, “I could have been killed for my country during the war, and I came back and couldn’t walk through the front door of a public bus station. That was a disgrace.”

He returned to Los Angeles and was welcomed back into the Black community as a returning hero and became active in the Chamber of Commerce. He was interviewed by numerous newspapers and magazines, all of which retold his unique personal history. Some of the publications targeted the Black community, others the military community, and still others, Communist Party members. He was also an honored guest at a dinner hosted by the American Youth for Democracy (a suspected Communist Party organization). Between these accolades and his personal history, there was increased suspicion that he had Communist associations – which was a problem during the late 1940s and 50s when Communism was seen as a heightened threat to the United States.

In 1946, Carter re-enlisted and served at Camp Lee, Virginia, where he was esteemed as a combat veteran and war hero. He was hand-picked to join a select group of professional soldiers to act as trainers with the California National Guard and in the Provost Office at Fort Lewis, Washington. Edward Carter excelled in both these positions, received positive accolades from his immediate and senior superiors and was promoted to Sergeant First Class.

It was the continued newspaper articles about him, however, that sustained the suspicion and surveillance.  SFC Edward Carter, recipient of the Distinguished Service Cross, was barred from re-enlistment in 1949 – perhaps as a result of McCarthyism (the widespread fear and practice of making accusations of communist affiliations without regard for evidence), perhaps a result of racism, or perhaps a combination of the two.

Carter appealed this barrier to his re-enlistment through legal channels, his congressman, the Department of the Army, and to President Truman. He also sought the help of the National Association for the Advancement of Colored People (NAACP) and the American Civil Liberties Union (ACLU). His appeals were denied and rumors of his involvement with the Communist Party resulted in the loss of two jobs and made it more difficult to find other employment. He did, however, eventually find work in the tire industry.  During this time, Carter wrote, “During WWII, I believed that I was fighting a ‘Holy War’. I believed and fought in defense of the democracy I now find myself denied…”

Carter began to experience pain from his war wounds and died of lung cancer in 1963 at the age of 46. He was buried at the Veterans Cemetery in Los Angeles and later re-interred at Arlington National Cemetery, in Arlington, Virginia.

While he died a disillusioned and bitter man, Edward Carter’s story does not end here.  In late 1996, his family was notified that his Distinguished Service Cross was to be upgraded to the Medal of Honor on January 13, 1997. After a great deal of research into government and agency files, conducted primarily by his daughter-in-law Allene Carter, SFC Carter was completely vindicated of all suspicions. His story was released in high profile publications and in 1999, his family received a formal apology from President Bill Clinton.

Kris Cotariu Harper EdD is an Army wife and the daughter of two WWII Navy Veterans. She is an educator and trainer who often writes and speaks on values demonstrated by Medal of Honor Recipients.

Who is Humbert Roque “Rocky” Versace?

Captain Humbert Roque ”Rocky” Versace was a part of the USMA Class of 1959. He distinguished himself through acts of extraordinary heroism while serving as an S-2 Adviser during the…

A1C William Pitsenbarger: A Hero Who Will Live On Forever