The CMOHS Salutes Medal of Honor Recipient Christopher A. Celiz 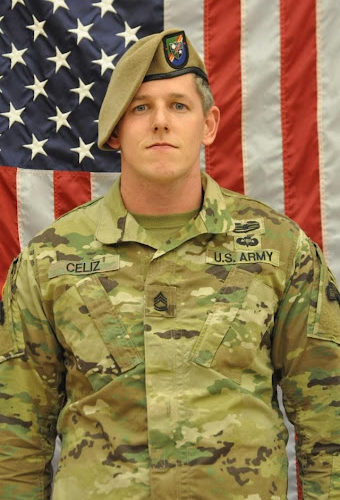 On Dec. 16, 2021, Sgt. First Class Christopher Celiz was posthumously awarded the Medal of Honor for going above and beyond the call of duty during his service in the U.S. Army during the War on Terrorism in Afghanistan. The Congressional Medal of Honor Society salutes his service and sacrifice, and now proudly works to preserve his legacy.

Celiz was raised in Summerville, South Carolina, and enlisted in the U.S. Army in 2007. He was assigned to Fort Hood, Texas, where he was eventually promoted to team leader. He was then assigned to Fort Stewart, Georgia, where he served as a sapper squad leader and platoon sergeant.

Christopher Celiz’s fifth deployment was to Paktia Province, Afghanistan, in 2018. His team was sent on a mission to clear an enemy force. After they completed their initial objective, a large enemy force attacked, placing effective gunfire on the team. Celiz emerged from his place of cover and exposed himself to machine gunfire and small arms gunfire to employ a heavy weapons system, giving his allies the ability to counterattack and administer aid.

A medical helicopter arrived, but was met with gunfire. While his team loaded the wounded partner, Celiz consistently put himself between the enemy and the aircraft to ensure that the casualty was loaded and the pilot was covered. While shielding the cockpit, Celiz was hit by enemy fire. Fully understanding how critically he was hit, and the peril of the aircraft, he commanded the aircraft to take off without him. He died as a result of his injuries. His selfless act saved the lives of multiple team members and aircrew.

The Medal of Honor was presented to Celiz’s family on Dec. 16, 2021, by President Joseph R. Biden at the White House.