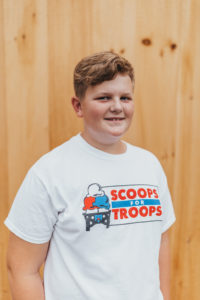 In 2019, a nine-year-old boy from Plainville, Connecticut, brought an unusual request to his parents. He asked if he could forgo birthday presents and instead collect money for a charity that had captivated his interest and touched his young heart.  Fast forward three years, and Michael Ahern, now 12, has organized his own non-profit and is being recognized by America’s greatest heroes–Medal of Honor Recipients–for his selfless service on behalf of the Travis Mills Foundation.

The Travis Mills Foundation funds barrier-free and all-expenses-paid experiences in Maine for “recalibrated” veterans and their families. Here, they can participate in adaptive activities, bond with other veteran families, and enjoy much-needed rest and relaxation in the great outdoors.

The retreat’s founder, retired Staff Sgt. Travis Mills, coined the term “recalibrated veteran” after he lost portions of all of his limbs in an IED explosion while serving in Afghanistan.

For Michael, the idea came about while on vacation with his family in Maine. “I first heard about the Travis Mills Foundation when I found out this big mansion was getting redone,” he said of the former Elizabeth Arden Estate in Mount Vernon. “I asked my parents about it, and they told me what the foundation was planning.” His curiosity was piqued.

That summer, the Aherns had the opportunity to meet some of the recalibrated veteran families, and Michael was captivated by their stories of sacrifice. He decided that he’d like to see the kids at the Travis Mills retreat enjoy one of his own favorite summer activities–a boat ride followed by an ice cream outing to Lakeside Scoop.

“He just wants the kids who come up here with their parents to have the same experiences, to do these things that he loves,” says Michael’s sister Kara.

After meeting his initial $400 goal—and giving the kids the experiences he had in mind—Michael wanted to go bigger: to raise enough money to host eight veteran families at the summer retreat.

“The Travis Mills Foundation explained it would take about $30,000, and it was like something just went off in his head. He wanted to raise it,” says Micheal’s dad Scott. “All we were able to do was support his dream. At that moment, Scoops for Troops was born.” Thanks to the generosity of countless contributors—and a $10,000 matching gift from Bogies for our Brave—Michael exceeded his goal.

Three years later, Michael has no plans of slowing down. He continues to fundraise for the Travis Mills Foundation every year, with help from his family and a growing community of supporters.

Now a 501 (c)(3), Scoops for Troops is just getting started. “My personal goal is to raise half a million dollars for the Travis Mills Foundation before I go to college,” Michael says.

To learn more about Scoops for Troops, click here.

Launched in 2007, the Citizen Honors Awards program reflects the mission of Medal of Honor Recipients show that they values associated with the Medal of Honor are relevant to all Americans. The tradition is also in keeping with the preference of Recipients to shine a light on others rather than themselves as they believe that the Medals of Honor they were awarded should be seen more broadly as a symbol of the sacrifices and service of others.

Everyday people across the United States perform extraordinary actions, whether through a single instance of bravery or through continued service to others. These acts of courage and willingness to serve…