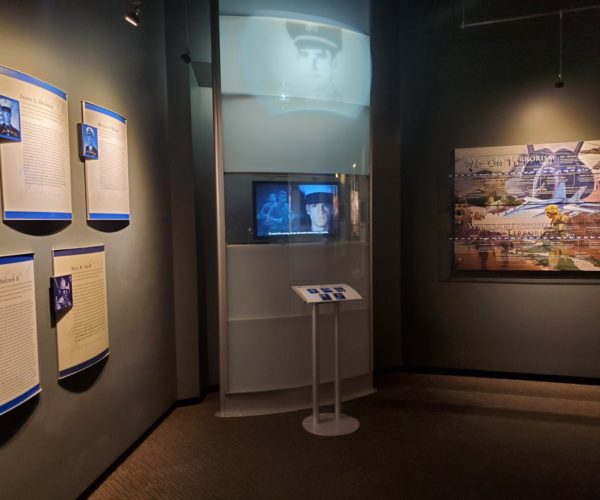 The Recipients who fought gallantly in these wars embody the core values of the Medal of Honor: courage, commitment, integrity, sacrifice, citizenship, and patriotism. It is our hope that these new portions of the museum will inspire attendees to take up those values for themselves.

Here is what you can expect from the new additions.

The New Exhibit for The War On Terrorism:

The Expanded Section on The Vietnam War:

This newly expanded section focusing on the Vietnam War includes two mini-documentaries which highlight Recipients John Levitow from the U.S. Air Force and Bennie Adkins from the U.S. Army. Those who attend this exhibit will be able to experience the existing portion of the Vietnam war exhibit as well as watch the new documentaries on these two brave men.

Why Should You Visit the Medal of Honor Recipients’ Museum?

Upon receiving the Society’s Patriot Award in 1983, President Ronald Reagan said, “It’s so easy to love America.” This museum helps the visitor understand why by offering ways to learn about our country and what it stands for as well as pay tribute to those who have gone above and beyond for our freedom. It is an educational, interactive, and family-friendly experience where any person or family can learn about what the Medal of Honor stands for and why we should all strive to live out those values in our own lives.

Medal of Honor Recipient and Society President Leroy Petry commented on the additions to the museum, “As a veteran of the War on Terrorism, I know firsthand how critical it is to educate the public about the courage and sacrifices of our service members in Afghanistan and Iraq and before that, Vietnam. We must never forget what these individuals have done. The stories in this exhibit provide lessons for a new generation about what it means to love your fellow soldiers and sailors on the battlefield and what it means to love your country.”

Where Is The Museum?

The Medal of Honor museum is located onboard the U.S.S. Yorktown at Patriots Point Naval & Maritime Museum in Mount Pleasant, South Carolina. To learn more about the museum, see pictures of exhibits and buy tickets, visit our page here.

MOUNT PLEASANT, S.C.—The Congressional Medal of Honor Society today announced the addition of new exhibits to its Recipients’ Museum to bring to life stories of valor and sacrifice in the…