Ignoring the fire that was concentrated on him, Stumpf left cover three times to carry each one back to friendly lines. He then organized the remaining men to neutralize two enemy bunkers. Stumpf took on a third bunker by himself, despite machine gun fire directed on him, enabling the success of the mission and preventing further loss of American soldiers.

For his actions that day, Stumpf was presented the Medal of Honor by President Lyndon B. Johnson on Sept. 19, 1968, in a White House ceremony.

When asked about his actions that day, Stumpf replied, “I’ve always said I didn’t do anything above and beyond the call of duty. What I did was my duty. I had to do that… it was a responsibility that I had to my men.”

He is survived by three children and numerous grandchildren. Burial arrangements are pending currently.

There are now 65 Medal of Honor recipients alive today.

Chartered by Congress in 1958, its membership consists exclusively of those individuals who have received the Medal of Honor. There are 65 living Recipients. 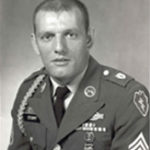 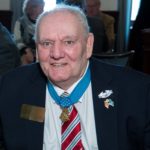