The Congressional Medal of Honor Society awards recognize organizations or individuals who promote and perpetuate the principles upon which our nation is founded; encourage the values of courage, commitment and selfless service; or who have demonstrated patriotism, valor and fidelity. To be awarded one of these medallions by the Society is a rare occurrence, as only a Medal of Honor Recipient may nominate someone for these awards.

Society President and Medal of Honor Recipient Leroy Petry said, “While Medal of Honor Recipients think it’s important to spotlight examples of ordinary citizens who demonstrate the values we associate with the Medal in order to show that each of us can serve our communities in our daily lives, we also seek to highlight our country’s leaders and influencers who demonstrate a commitment to these principles to remind us that they can play unique roles in perpetuating a culture of American values.”

The Patriot Award is reserved for people who have distinguished themselves as Americans dedicated to freedom and the ideals represented by the Congressional Medal of Honor Society. Haley was the first female governor of South Carolina. She was also the first female Asian American governor, and the first Indian American in a presidential cabinet, serving as the U.S. ambassador to the United Nations from 2017 to 2018. Past honorees include Gen. William C. Westmoreland, Elizabeth Dole and Gary Sinise.

The Distinguished Citizen Award is bestowed on people who have distinguished themselves as Americans dedicated to freedom and the ideals represented by the Society. Miller is a re

tired plastic and reconstructive surgeon, and professor emeritus and former chief of plastic surgery at UCLA Health, as well as a Bronze Star recipient for his service in Vietnam. Miller is co-founder of Operation Mend, a program that provides free reconstructive surgery to severely wounded and disfigured veterans of the recent conflicts in Afghanistan and Iraq. Past honorees include Raymond Kelly, George Shultz and Brett Favre.

The “Tex” McCrary Award is reserved for those persons from the fourth estate who, through their life’s work, have distinguished themselves by service or unbiased coverage of the United States Military through journalism in peace and war. Kube covers the Pentagon and the Department of Defense, reporting on military operations and foreign policy for all NBC News and MSNBC programs. Past honorees include Bob Woodruff, Peggy Noonan and Tom Brokaw.

The Bob Hope Award is reserved for entertainers who have distinguished themselves by outstanding service to or positive portrayal of the U.S. military in literature or film. Powell starred in “Top Gun: Maverick” and is portraying Medal of Honor Recipient Tom Hudner in the upcoming film, “Devotion.” Past honorees include Tom Selleck, Bradley Cooper and Jay Leno. 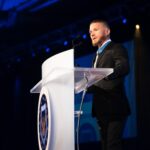 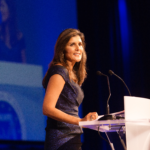 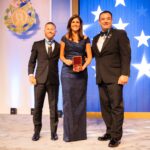