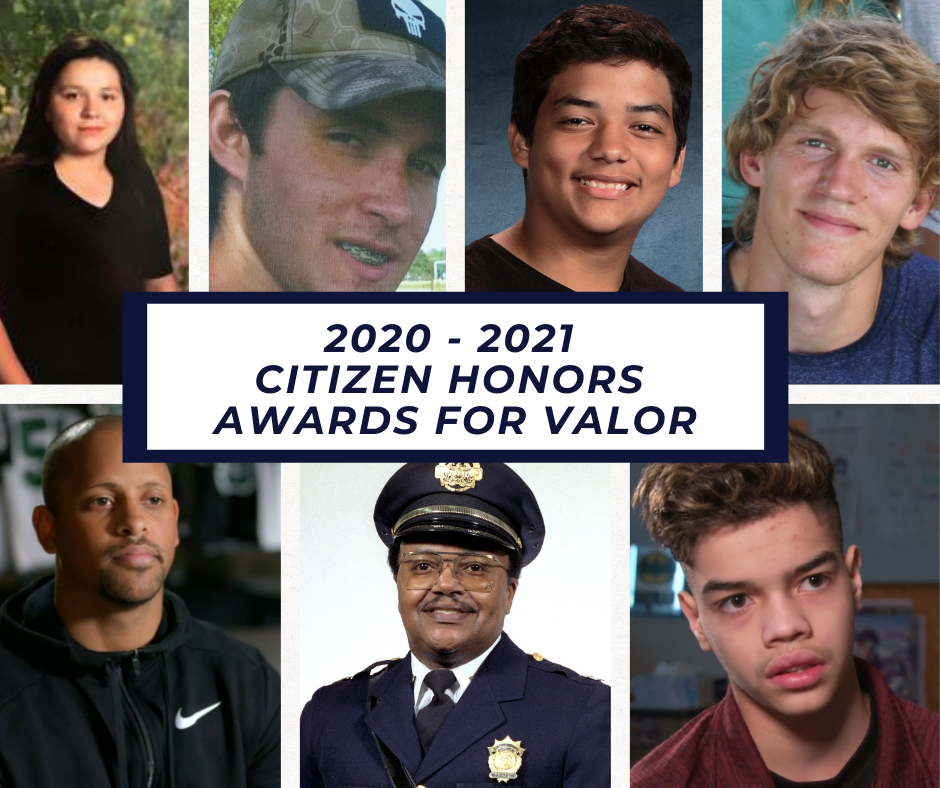 On Friday, Sept. 10, the Congressional Medal of Honor Society had the opportunity to honor seven Citizen Honors Award for Valor Honorees with an in-person ceremony.

The awards program is just one of numerous ways that the Congressional Medal of Honor Society (the Society) carries out its mission to promote the values embodied by the Medal: courage, sacrifice, integrity, commitment, patriotism, and citizenship.

During the event, which took place in Boston, Massachusetts during the Society’s annual convention, both those who were awarded the Single Act of Heroism Award and the Young Hero Award were recognized. Both awards are given to Americans who accomplish extraordinary feats of heroism by risking their lives for the benefit of others in a dire situation. We invite you to read the honorees’ incredible stories of sacrifice and courage below.

On April 30, 2019, a gunman opened fire at the University of North Carolina. Without hesitation Riley Howell charged the gunman and tackled him to the ground, ending the violence. Riley gave his life to save the students around him. For this incredible act of courage, he was selected for the Single Act of Heroism Award.

Keanon Lowe was selected for the Single Act of Heroism Award for his courageous act when he disarmed a student with a loaded gun during an incident at Parkrose High School in Portland, Oregon. He is credited with saving the lives of both his fellow faculty members and students at the school.

On May 18, 2018, a gunman opened fire at Santa Fe High School. Christian Riley Garcia quickly began ushering students to safety and barricaded the door to ensure his classmates could escape. He did not survive the attack and is attributed to saving the lives of his fellow students.

In June 2018, Cody Runyon took a trip to a local pool with friends and family. Noticing that one of his younger friends was unconscious underwater, he went down to help. Cody was able to recognize the danger and react quickly, preventing further tragedy. His friend credits Cody and another bystander for saving his life.

When Raina Neeland noticed that her three younger cousins had gotten caught in the currents at Clearwater Lake, she jumped in and saved them from the choppy waters. She was able to find the strength to pull them all to safety before succumbing to the currents. She is credited with saving their lives.

In the early hours of the morning of June 2, 2020, David Dorn was alerted that his friend’s business was being ransacked by looters. In the middle of the night, he left the safety of his home to save his friend’s business and protect his community. Upon arriving at the scene to confront the looters, he was mortally wounded. His heroic actions and care for his community still impact his town in St. Louis, Missouri.

In 2018, a gunman opened fire at Chris Stone’s school in Santa Fe, Texas. Chris quickly took action to protect others and used his body as a human barricade to protect other students who were hiding inside an art room closet. He sacrificed his life for his fellow students and saved the lives of many in his classroom that day.

To learn more about our Citizen Honors Awards, we invite you to click here.

Riley Howell, of Waynesville, NC, is honored for his courageous act when he shielded students from a gunman during an incident at the University of North Carolina - Charlotte. Riley…

The Medal of Honor Recipients will present the Citizen Honors Awards for Valor for years 2020 and 2021. The annual presentation of the Single Act of Heroism Award and Youth…