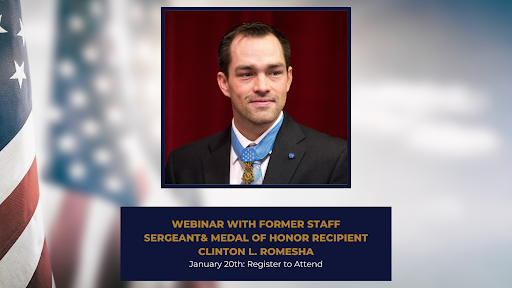 On Thursday, January 20th, the Congressional Medal of Honor Society’s Character Development Program will be hosting a webinar interview with former Staff Sgt. and Medal of Honor Recipient Clinton L. Romesha. Middle and high school educators are encouraged to register their class for this free webinar, where students will have the opportunity to hear from one of our nation’s heroes.

Career: Former Staff Sgt. Clinton L. Romesha was born in Lake City, CA, on August 17, 1981, and enlisted in the U.S. Army in September 1999. After completion of training at Fort Knox, KY, he was assigned as a tank gunner with B Company, 1-63rd Armor at Camp Vilseck, Germany, which included an operational deployment to Kosovo. Romesha deployed twice to Iraq in support of Operation Iraqi Freedom, and once to Afghanistan in support of Operation Enduring Freedom. At the time of the deadly attack on Combat Outpost (COP) Keating, Kamdesh District, Afghanistan, on Oct. 3, 2009, Staff Sgt. Romesha was assigned as a section leader for Bravo Troop, 3-61st Cavalry, 4th Brigade Combat Team, 4th Infantry Division.

The Battle: While stationed in Afghanistan in 2009, Romesha and his comrades were awakened to an attack on their base by approximately three hundred enemy fighters. At the risk of his own life, Romesha moved confidently through the battlefield to gain reconnaissance, to mobilize teams, and to direct air-support. Although he was injured by shrapnel during the conflict, he continued to destroy enemy targets and was monumental in the recovery of fallen comrades. His efforts allowed his troop to regroup and counterattack the overwhelming force.

Medal of Honor Presentation Date: Clinton L. Romesha was awarded the Medal of Honor, the highest award for military valor in action, on February 11, 2013, during a ceremony at the White House in which President Barack Obama presented the Medal to Romesha. Click here to read a transcript of the ceremony.

On January 20th, the Congressional Medal of Honor Society’s Executive Director of Education, Cathy Ehlers Metcalf, will host a one hour webinar with Medal of Honor Recipient Romesha. Geared towards middle and high school students, this webinar can be viewed live or watched later. Those who plan on attending are encouraged to read the Society’s resources on Romesha’s life and acts of valor as well as view Romesha’s Living History video.

During the webinar, Romesha will answer pre-submitted and live questions from students. The webinar will feature life lessons on integrity and valor that students can use in their day-to-day lives.

Teachers and educators can register their class and join the Society for free on Thursday, January 20th, 1 PM EST.

The Congressional Medal of Honor Society, a 501(c)(3) nonprofit organization, is dedicated to preserving the legacy of the Medal of Honor and its Recipients, inspiring Americans, and supporting the Recipients as they connect with communities across the country. Chartered by Congress in 1958, its membership consists exclusively of those individuals who have received the Medal of Honor, including 67 living Recipients.