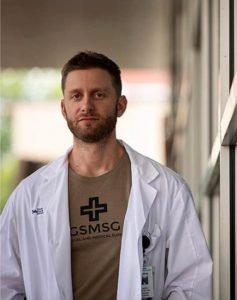 Dr. Aaron Epstein was only two weeks into his first semester of medical school when he created the Global Surgical Medical Support Group (GSMSG), an organization that provides medical relief to communities in conflict zones and disaster areas around the world with the help of teams of special forces medics, physicians, and surgeons.

Inspired by the events of Sept. 11, 2002, Dr. Epstein’s career began not in medicine, but in national security. It was during this time that a new seed was planted, leading him to the realization that a different path might allow him to make the positive impact on others’ lives that he was seeking.

“I got a graduate degree in intelligence and got to spend some time in the Middle East,” he says. “If we went somewhere and someone’s mother or child was sick and we could do some kind of intervention, it created a complete, solid connection to that community. That’s when I started having a bit of a mental switch, thinking maybe medicine was the best way to reach these communities.”

Now a surgical trainee at the University at Buffalo in New York, Dr. Epstein has traveled around the world carrying out the GSMSG mission. This year, he is being recognized by individuals who know a great deal about the importance of service–Medal of Honor Recipients. Part of an annual tradition, the Congressional Medal of Honor Society, the membership organization of Medal of Honor Recipients founded by Congress in 1958, is honoring Dr. Epstein with its Service Award at a ceremony in Charleston, South Carolina.

Back on campus, Aaron’s story inspires awe in his peers and professors alike.

“He’s an outstanding surgeon, but very few people can balance more than one thing at a time during training,” says Dr. Jim Lukan, associate professor of surgery. “General surgeon training is intense. Just imagine doing that alongside running this group. It’s remarkable.”

Dr. Steven Schwaitzberg, chairman of the department, chimed in, “Service is Aaron’s life. He values it as one of his highest priorities. One of the things that makes him so deserving of this award is that he has inspired so many other people to join in.”

“The fact that this award is coming from the Congressional Medal of Honor society is very meaningful.” he said. “If anyone is going to truly understand the impact of what we’re doing on the ground, it’s gonna be these guys.”

He added, “If I can just make someone else’s existence in this world a little better, to me that’s what service means.”

Launched in 2007, the Citizen Honors Awards program reflects the mission of Medal of Honor Recipients and show that they values associated with the Medal of Honor are relevant to all Americans. The tradition is also in keeping with the preference of Recipients to shine a light on others rather than themselves as they believe that the Medals of Honor they were awarded should be seen more broadly as a symbol of the sacrifices and service of others.