For conspicuous gallantry and intrepidity at the risk of his life above and beyond the call of duty as commanding officer of Company G, in action against enemy aggressor forces. Ordered to break through enemy-infested territory to reinforce his battalion the morning of 29 November, Capt. Sitter continuously exposed himself to enemy fire as he led his company forward and, despite 25 percent casualties suffered in the furious action, succeeded in driving through to his objective. Assuming the responsibility of attempting to seize and occupy a strategic area occupied by a hostile force of regiment strength deeply entrenched on a snow-covered hill commanding the entire valley southeast of the town, as well as the line of march of friendly troops withdrawing to the south, he reorganized his depleted units the following morning and boldly led them up the steep, frozen hillside under blistering fire, encouraging and redeploying his troops as casualties occurred and directing forward platoons as they continued the drive to the top of the ridge. During the night when a vastly outnumbering enemy launched a sudden, vicious counterattack, setting the hill ablaze with mortar, machine-gun, and automatic-weapons fire and taking a heavy toll in troops, Capt. Sitter visited each foxhole and gun position, coolly deploying and integrating reinforcing units consisting of service personnel unfamiliar with infantry tactics into a coordinated combat team and instilling in every man the will and determination to hold his position at all costs. With the enemy penetrating his lines in repeated counterattacks which often required hand-to-hand combat, and, on one occasion infiltrating to the command post with hand grenades, he fought gallantly with his men in repulsing and killing the fanatic attackers in each encounter. Painfully wounded in the face, arms, and chest by bursting grenades, he staunchly refused to be evacuated and continued to fight on until a successful defense of the area was assured with a loss to the enemy of more than 50 percent dead, wounded, and captured. His valiant leadership, superb tactics, and great personal valor throughout 36 hours of bitter combat reflect the highest credit upon Capt. Sitter and the U.S. Naval Service. 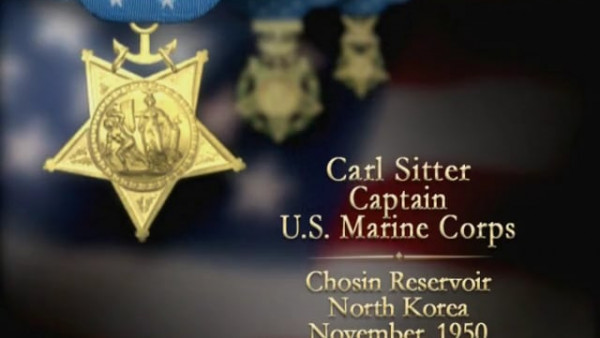