For commanding Company C, 30th Infantry, displaying supreme courage and heroic initiative near Kaysersberg, France on 16 December 1944, while leading a reinforced platoon into enemy territory. Descending into a valley beneath hilltop positions held by our troops, he observed a force of 200 Germans pouring deadly mortar, bazooka, machine-gun, and small-arms fire into an American battalion occupying the crest of the ridge. The enemy's position in a sunken road, though hidden from the ridge, was open to a flank attack by 1st Lt. Murray's patrol but he hesitated to commit so small a force to battle with the superior and strongly disposed enemy. Crawling out ahead of his troops to a vantage point, he called by radio for artillery fire. His shells bracketed the German force, but when he was about to correct the range his radio went dead. He returned to his patrol, secured grenades and a rifle to launch them, and went back to his self-appointed outpost. His first shots disclosed his position; the enemy directed heavy fire against him as he methodically fired his missiles into the narrow defile. Again he returned to his patrol. With an automatic rifle and ammunition, he once more moved to his exposed position. Burst after burst he fired into the enemy, killing 20, wounding many others, and completely disorganizing its ranks, which began to withdraw. He prevented the removal of three German mortars by knocking out a truck. By that time a mortar had been brought to his support. First Lt. Murray directed the fire of this weapon, causing further casualties and confusion in the German ranks. Calling on his patrol to follow, he then moved out toward his original objective, possession of a bridge and construction of a roadblock. He captured 10 Germans in foxholes. An eleventh, while pretending to surrender, threw a grenade which knocked him to the ground, inflicting eight wounds. Though suffering and bleeding profusely, he refused to return to the rear until he had chosen the spot for the block and had seen his men correctly deployed. By his singlehanded attack on an overwhelming force and by his intrepid and heroic fighting, 1st Lt. Murray stopped a counterattack, established an advance position against formidable odds, and provided an inspiring example for the men of his command. 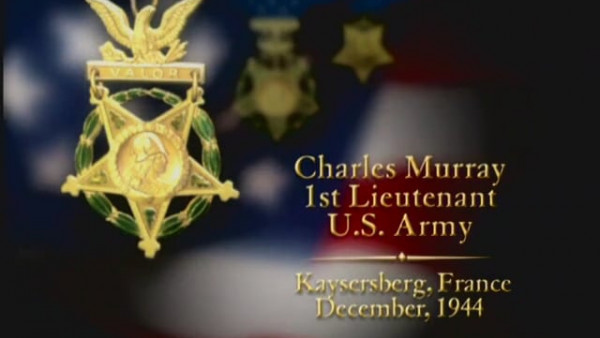