He fought with extreme gallantry in the streets of war-torn Nuremberg, Germany, where the 1st Battalion, 15th Infantry, was engaged in rooting out fanatical defenders of the citadel of Nazism. As battalion transportation officer he had gone forward to select a motor-pool site, when, in a desire to perform more than his assigned duties and participate in the fight, he advanced beyond the lines of the forward riflemen. Detecting a group of about 10 Germans making preparations for a local counterattack, he rushed back to a nearby American company, secured a light machine gun with ammunition, and daringly opened fire on this superior force, which deployed and returned his fire with machine pistols, rifles, and rocket launchers. From another angle a German machine gun tried to blast him from his emplacement, but 1st Lt. Burke killed this guncrew and drove off the survivors of the unit he had originally attacked. Giving his next attention to enemy infantrymen in ruined buildings, he picked up a rifle and dashed more than 100 yards through intense fire and engaged the Germans from behind an abandoned tank. A sniper nearly hit him from a cellar only 20 yards away, but he dispatched this adversary by running directly to the basement window, firing a full clip into it and then plunging through the darkened aperture to complete the job. He withdrew from the fight only long enough to replace his jammed rifle and secure grenades, then reengaged the Germans. Finding his shots ineffective, he pulled the pins from two grenades, and, holding one in each hand, rushed the enemy-held building, hurling his missiles just as the enemy threw a potato-masher grenade at him. In the triple explosion the Germans were wiped out and 1st Lt. Burke was dazed; but he emerged from the shower of debris that engulfed him, recovered his rifle, and went on to kill three more Germans and meet the charge of a machine pistolman, whom he cut down with three calmly delivered shots. He then retired toward the American lines and there assisted a platoon in a raging, 30-minute fight against formidable armed hostile forces. This enemy group was repulsed, and the intrepid fighter moved to another friendly group which broke the power of a German unit armed with a 20-mm gun in a fierce firefight. In four hours of heroic action, 1st Lt. Burke singlehandedly killed 11 and wounded three enemy soldiers and took a leading role in engagements in which an additional 29 enemy were killed or wounded. His extraordinary bravery and superb fighting skill were an inspiration to his comrades, and his entirely voluntary mission into exremely dangerous territory hastened the fall of Nuremberg, in his battalion's sector. 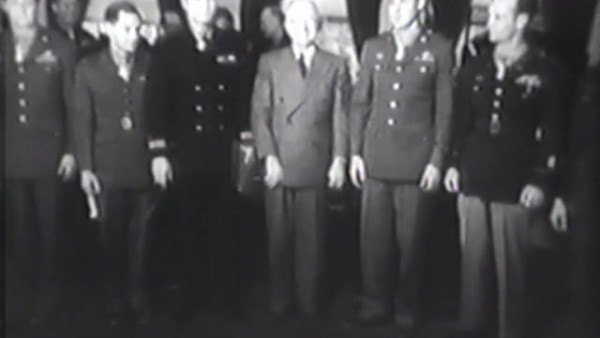