Capt. James M. Burt was in command of Company B, 66th Armored Regiment on the western outskirts of Wurselen, Germany on 13 October 1944, when his organization participated in a coordinated infantry-tank attack destined to isolate the large German garrision which was tenaciously defending the city of Aachen. In the first day's action, when infantrymen ran into murderous small-arms and mortar fire, Capt. Burt dismounted from his tank about 200 yards to the rear and moved forward on foot beyond the infantry positions, where, as the enemy concentrated a tremendous volume of fire upon him, he calmly motioned his tanks into good firing positions. As our attack gained momentum, he climbed aboard his tank and directed the action from the rear deck, exposed to hostile volleys which finally wounded him painfully in the face and neck. He maintained his dangerous post despite point-blank self-propelled gunfire until friendly artillery knocked out these enemy weapons, and then proceeded to the advanced infantry scout's positions to deploy his tanks for the defense of the gains which had been made. The next day, when the enemy counterattacked, he left cover and went 75 yards through heavy fire to assist the infantry battalion commander who was seriously wounded. For the next eight days, through rainy, miserable weather and under constant, heavy shelling, Capt. Burt held the combined forces together, dominating and controlling the critical situation through the sheer force of his heroic example. To direct artillery fire, on 15 October, he took his tank 300 yards into the enemy lines, where he dismounted and remained for one hour giving accurate data to friendly gunners. Twice more on that day he went into enemy territory under deadly fire on reconnaissance. In succeeding days he never faltered in his determination to defeat the strong German forces opposing him. Twice the tank in which he was riding was knocked out by enemy action, and each time he climbed aboard another vehicle and continued the fight. He took great risks to rescue wounded comrades and inflicted prodigious destruction on enemy personnel and material even though suffering from the wounds he received in the battle's opening phase. Capt. Burt's intrepidity and disregard for personal safety were so complete that his own men and the infantry who attached themselves to him were inspired to overcome the wretched and extremely hazardous conditions which accompanied one of the most bitter local actions of the war. The victory achieved closed the Aachen gap. 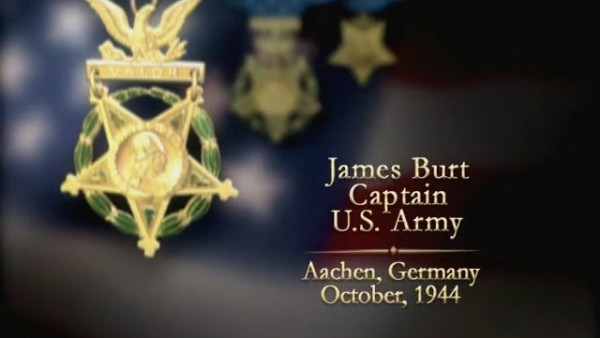