Specialist Kyle J. White distinguished himself by acts of gallantry and intrepidity at the risk of his life above and beyond the call of duty while serving as a radio telephone operator with Company C, 2d Battalion (Airborne), 503d Infantry Regiment, 173d Airborne Brigade, during combat operations against an armed enemy in Nuristan Province, Afghanistan on November 9, 2007. On that day, Specialist White and his comrades were returning to Bella Outpost from a shura with Aranas Village elders. As the soldiers traversed a narrow path surrounded by mountainous, rocky terrain, they were ambushed by enemy forces from elevated positions. Pinned against a steep mountain face, Specialist White and his fellow soldiers were completely exposed to enemy fire. Specialist White returned fire and was briefly knocked unconscious when a rocket-propelled grenade impacted near him. When he regained consciousness, another round impacted near him, embedding small pieces of shrapnel in his face. Shaking off his wounds, Specialist White noticed one of his comrades lying wounded nearby. Without hesitation, Specialist White exposed himself to enemy fire in order to reach the soldier and provide medical aid. After applying a tourniquet, Specialist White moved to an injured Marine, similarly providing aid and comfort until the Marine succumbed to his wounds. Specialist White then returned to the soldier and discovered that he had been wounded again. Applying his own belt as an additional tourniquet, Specialist White was able to stem the flow of blood and save the soldier's life. Noticing that his and the other soldier’s radios were inoperative, Specialist White exposed himself to enemy fire yet again in order to secure a radio from a deceased comrade. He then provided information and updates to friendly forces, allowing precision airstrikes to stifle the enemy’s attack and ultimately permitting medical evacuation aircraft to rescue him, his fellow soldiers, Marines and Afghan Army soldiers. Specialist Kyle J. White’s extraordinary heroism and selflessness above and beyond the call of duty are in keeping with the highest traditions of military service and reflect great credit upon himself, Company C, 2d Battalion (Airborne), 503d Infantry Regiment, 173d Airborne Brigade and the United States Army. 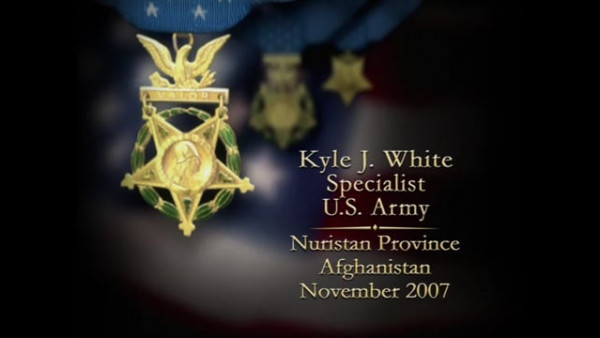 Join Us for Our Webinar with Medal of Honor Recipient Kyle J. White

CDP Webinars: How You Can Participate

Medal of Honor recipient teaching others about being a hero

Kyle White: What It's Like to Be a Medal of Honor Recipient