Sergeant Matthew O. Williams distinguished himself by acts of gallantry and intrepidity above and beyond the call of duty on April 6, 2008, while serving as a Weapons Sergeant, Special Forces Operational Detachment Alpha 3336, Special Operations Task Force-33, in support of Operation ENDURING FREEDOM. Sergeant Williams was part of an assault element inserted by helicopter into a location in Afghanistan. As the assault element was moving up a mountain toward its objective, it was engaged by intense enemy machine gun, sniper, and rocket-propelled grenade fire. The lead portion of the assault element, which included the ground commander, sustained several casualties and became pinned down on the sheer mountainside. Sergeant Williams, upon hearing that the lead element had sustained casualties and was in danger of being overrun, braved intense enemy fire to lead a counter-attack across a valley of ice-covered boulders and a fast-moving, ice cold, and waist-deep river. Under withering fire, Sergeant Williams and his local national commandos fought up the terraced mountainside to the besieged element. Arriving at the lead element’s position, Sergeant Williams arrayed his Afghan commandos to provide suppressive fire, which kept the insurgent fighters from overrunning the position. When the Team Sergeant was wounded, Sergeant Williams braved enemy fire once again to provide buddy-aid and to move the Team Sergeant down the sheer mountainside to the casualty collection point. Sergeant Williams then fought and climbed his way back up the mountainside to help defend the lead assault element that still had several serious casualties in need of evacuation. Sergeant Williams directed suppressive fire and exposed himself to enemy fire in order to reestablish the team’s critical satellite radio communications. He then assisted with moving the wounded down the near-vertical mountainside to the casualty collection point. Noting that the collection point was about to be overrun by enemy fighters, Sergeant Williams led the Afghan commandos in a counter-attack that lasted for several hours. When helicopters arrived to evacuate the wounded, Sergeant Williams again exposed himself to enemy fire, carrying and loading casualties onto the helicopters while continuing to direct commando firepower to suppress numerous insurgent positions. His actions enabled the patrol to evacuate wounded and dead comrades without further casualties. Sergeant Williams’ complete disregard for his own safety and his concern for the safety of his teammates ensured the survival of four critically wounded soldiers and prevented the lead element of the assault force from being overrun by the enemy. Sergeant Williams' actions are in keeping with the finest traditions of military service and reflect great credit upon himself, Combined Joint Special Operations Task Force-Afghanistan, Special Operations Command Central, and the United States Army. 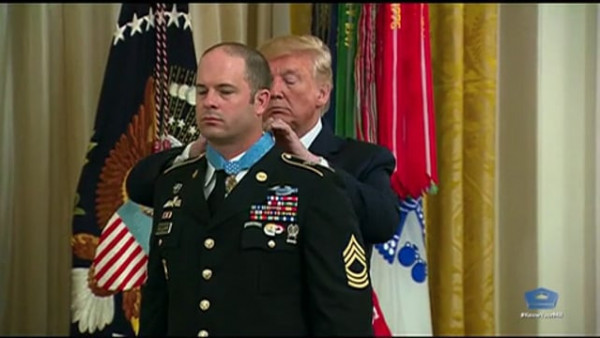 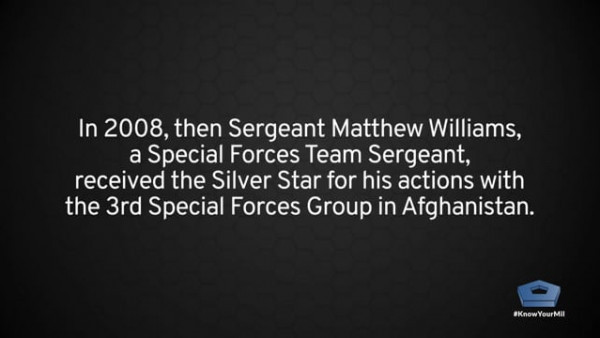 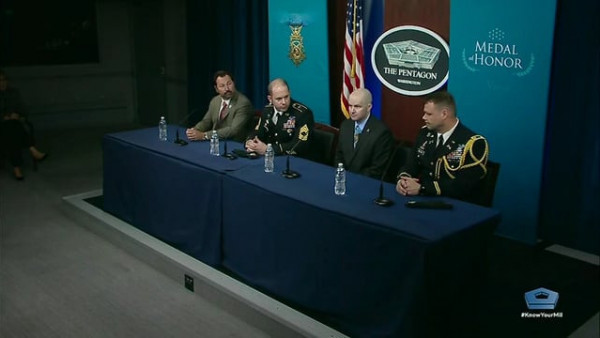