For conspicuous gallantry and intrepidity at the risk of his life above and beyond the call of duty: First Lieutenant Ralph Puckett, Jr. distinguished himself by acts of gallantry and intrepidity above and beyond the call of duty, while serving as the Commander, 8th U.S. Army Ranger Company during the period of 25 November 1950 through 26 November 1950, in Korea. As his unit commenced a daylight attack on Hill 205, the enemy directed mortar, machine gun, and small arms fire against the advancing force. To obtain supporting fire, First Lieutenant Puckett mounted the closest tank, exposing himself to the deadly enemy fire. Leaping from the tank, he shouted words of encouragement to his men and began to lead the Rangers in the attack. Almost immediately, enemy fire threatened the success of the attack by pinning down one platoon. Leaving the safety of his position with full knowledge of the danger, First Lieutenant Puckett intentionally ran across an open area three times to draw enemy fire, thereby allowing the Rangers to locate and destroy the enemy positions and to seize Hill 205. During the night, the enemy launched a counterattack that lasted four hours. Over the course of the counterattack, the Rangers were inspired and motivated by the extraordinary leadership and courageous example exhibited by First Lieutenant Puckett. As a result, five human wave attacks by a battalion strength enemy element were repulsed. During the first attack, First Lieutenant Puckett was wounded by grenade fragments, but refused evacuation and continually directed artillery support that decimated attacking enemy formations, repeatedly abandoned positions of relative safety to make his way from foxhole to foxhole to check the company’s perimeter, and distribute ammunition amongst the Rangers. When the enemy launched a sixth attack, it became clear to First Lieutenant Puckett that the position was untenable due to the unavailability of supporting artillery fire. During this attack, two enemy mortar rounds landed in his foxhole, inflicting grievous wounds which limited his mobility. Knowing his men were in a precarious situation, First Lieutenant Puckett commanded the Rangers to leave him behind and evacuate the area. Feeling a sense of duty to aid him, the Rangers refused the order and staged an effort to retrieve him from the foxhole while still under fire from the enemy. Ultimately, the Rangers succeeded in retrieving First Lieutenant Puckett and they moved to the bottom of the hill, where First Lieutenant Puckett called for devastating artillery fire on the top of the enemy controlled hill. First Lieutenant Puckett’s extraordinary heroism and selflessness above and beyond the call of duty were in keeping with the highest traditions of military service and reflect great credit upon himself, his unit, and the United States Army. 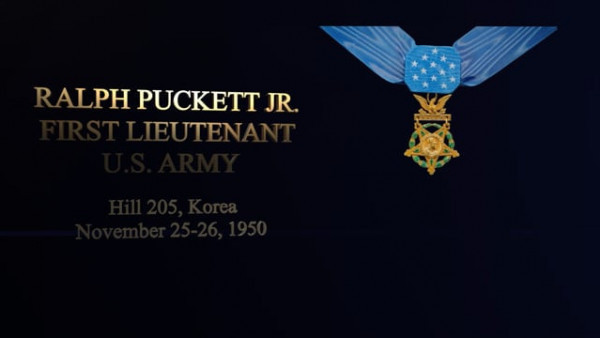 America’s newest Medal of Honor recipient: ‘Our greatest enemy is ourselves’