For conspicuous gallantry and intrepidity at the risk of his life above and beyond the call of duty as commanding officer of the 1st Battalion, in action against enemy aggressor forces. Although keenly aware that the operation involved breaking through a surrounding enemy and advancing eight miles along primitive icy trails in the bitter cold with every passage disputed by a savage and determined foe, Lt. Col. Davis boldly led his battalion into the attack in a daring attempt to relieve a beleaguered rifle company and to seize, hold, and defend a vital mountain pass controlling the only route available for two marine regiments in danger of being cut off by numerically superior hostile forces during their redeployment to the port of Hungnam. When the battalion immediately encountered strong opposition from entrenched enemy forces commanding high ground in the path of the advance, he promptly spearheaded his unit in a fierce attack up the steep, ice-covered slopes in the face of withering fire and, personally leading the assault groups in a hand-to-hand encounter, drove the hostile troops from their position, rested his men, and reconnoitered the area under enemy fire to determine the best route for continuing the mission. Always in the thick of the fighting, Lt. Col. Davis led his battalion over three successive ridges in the deep snow in continuous attacks against the enemy and, constantly inspiring and encouraging his men throughout the night, brought his unit to a point within 1,500 yards of the surrounded rifle company by daybreak. Although knocked to the ground when a shell fragment struck his helmet and two bullets pierced his clothing, he arose and fought his way forward at the head of his men until he reached the isolated marines. On the following morning, he bravely led his battalion in securing the vital mountain pass from a strongly entrenched and numerically superior hostile force, carrying all his wounded with him, including 22 litter cases and numerous ambulatory patients. Despite repeated savage and heavy assaults by the enemy, he stubbornly held the vital terrrain until the two regiments of the division had deployed through the pass and, on the morning of 4 December, led his battalion into Hagaru-ri intact. By his superb leadership, outstanding courage, and brilliant tactical ability, Lt. Col. Davis was directly instrumental in saving the beleagured rifle company from complete annihilation and enabled the two marine regiments to escape possible destruction. His valiant devotion to duty and unyielding fighting spirit in the face of almost insurmountable odds enhance and sustain the highest traditions of the U.S. Naval Service. 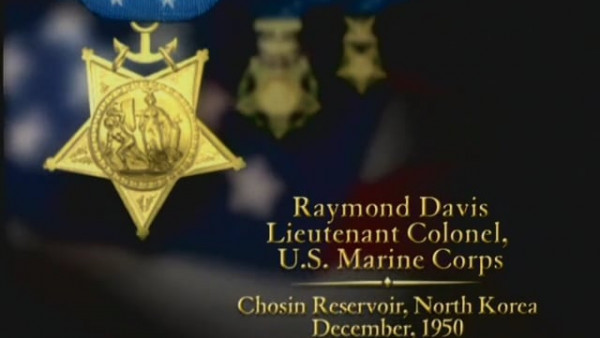