For conspicuous gallantry and intrepidity at the risk of his life above and beyond the call of duty:First Lieutenant Vernon J. Baker distinguished himself by extraordinary heroism in action on 5 and 6 April 1945. At 0500 hours on 5 April 1945, Lieutenant Baker advanced at the head of his weapons platoon, along with Company C's three rifle platoons, towards their objective; Castle Aghinolfi - a German mountain strong point on the high ground just east of the coastal highway and about two miles from the 370th infantry Regiment's line of departure. Moving more rapidly than the rest of the company, Lieutenant Baker and about 25 men reached the south side of a draw some 250 yards from the castle within two hours. In reconnoitering for a suitable position to set up a machine gun, Lieutenant Baker observed two cylindrical objects pointing out of a slit in a mount at the edge of a hill. Crawling up and under the opening, he stuck his M-1 into the slit and emptied the clip, killing the observation post's two occupants. Moving to another position in the same area, Lieutenant Baker stumbled upon a well-camouflaged machine gun nest, the crew of which was eating breakfast. He shot and killed both enemy soldiers. After Captain John F. Runyon, Company C's Commander joined the group, a German soldier appeared from the draw and hurled a grenade which failed to explode. Lieutenant Baker shot the enemy soldier twice as he tried to flee. Lieutenant Baker then went down into the draw alone. There he blasted open the concealed entrance of another dugout with a hand grenade, shot one German soldier who emerged after the explosion, tossed another grenade into the dugout and entered firing his sub-machine gun, killing two more Germans. As Lieutenant Baker climbed back out of the draw, enemy machine gun and mortar fire began to inflict heavy casualties among the group of 25 soldiers, killing or wounding about two-thirds of them. When expected reinforcements did not arrive, Captain Runyon ordered a withdrawal in two groups. Lieutenant Baker volunteered to cover the withdrawal of the first group, which consisted mostly of walking wounded, and to remain to assist in the evacuation of the more seriously wounded. During the second group's withdrawal, Lieutenant Baker, supported by covering fire from one of his platoon members, destroyed two machine gun positions (previously bypassed during the assault) with hand grenades. In all, Lieutenant Baker accounted for nine enemy dead soldiers, elimination of three machine gun positions, an observation post, and a dugout. On the following night, Lieutenant Baker voluntary led a battalion advance through enemy mine fields and heavy fire toward the division objective. Lieutenant Baker's fighting spirit and daring leadership were an inspiration to his men and exemplify the highest traditions of the military service. 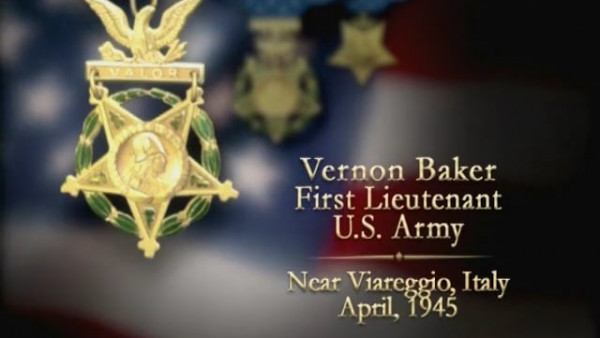