For conspicuous gallantry and intrepidity at the risk of his life above and beyond the call of duty on 9-10 June 1944 near Goville, France. S/Sgt. Ehlers, always acting as the spearhead of the attack, repeatedly led his men against heavily defended enemy strongpoints, exposing himself to deadly hostile fire whenever the situation required heroic and courageous leadership. Without waiting for an order, S/Sgt. Ehlers, far ahead of his men, led his squad against a strongly defended enemy strongpoint, personally killing four of an enemy patrol who attacked him en route. Then crawling forward under withering machine-gun fire, he pounced upon the gun-crew and put it out of action. Turning his attention to two mortars protected by the crossfire of two machine guns, S/Sgt. Ehlers led his men through this hail of bullets to kill or put to flight the enemy of the mortar section, killing three men himself. After mopping up the mortar positions, he again advanced on a machine gun, his progress effectively covered by his squad. When he was almost on top of the gun he leaped to his feet and, although greatly outnumbered, he knocked out the position singlehandedly. The next day, having advanced deep into enemy territory, the platoon of which S/Sgt. Ehlers was a member finding itself in an untenable position as the enemy brought increased mortar, machine-gun, and small-arms fire to bear on it, was ordered to withdraw. S/Sgt. Ehlers, after his squad had covered the withdrawal of the remainder of the platoon, stood up and by continuous fire at the semicircle of enemy placements, diverted the bulk of the heavy hostile fire on himself, thus permitting the members of his own squad to withdraw. At this point, though wounded himself, he carried his wounded automatic rifleman to safety and then returned fearlessly over the shell-swept field to retrieve the automatic rifle which he was unable to carry previously. After having his wound treated, he refused to be evacuated, and returned to lead his squad. The intrepid leadership, indomitable courage, and fearless aggressiveness displayed by S/Sgt. Ehlers in the face of overwhelming enemy forces serve as an inspiration to others. 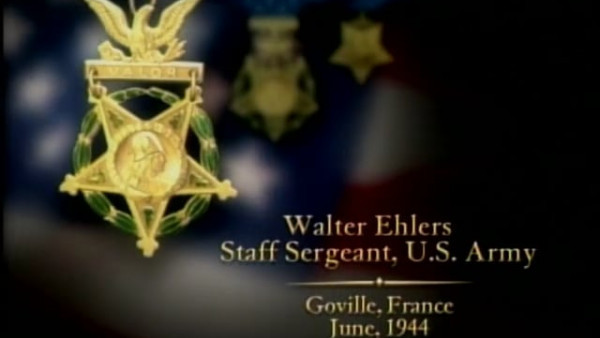