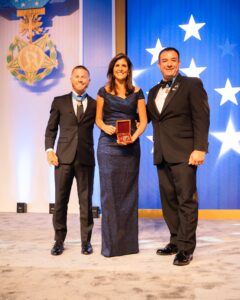 to or positive portrayal of the U.S. military in literature or film. Powell starred in “Top Gun: Maverick” and is portraying Medal of Honor Recipient Tom Hudner in the upcoming film, “Devotion.” Past honorees include Tom Selleck, Bradley Cooper and Jay Leno. About The Congressional Medal of Honor