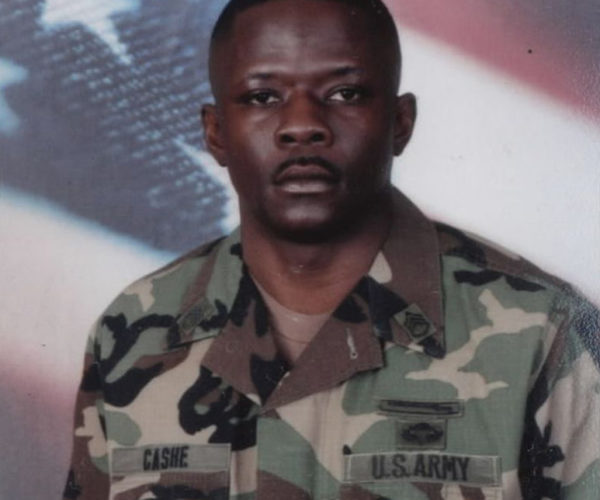 Recipient Cashe grew up in Ovieda, Florida. After he graduated from Ovieda High School, he enlisted in the U.S. Army and soon deployed  to the Middle East for the first Gulf War, before he returned to the U.S. for a three-year assignment at Fort Lewis, Washington. He then served in Korea for a year before returning to the U.S. again as a squad leader at Fort Hood,Texas.

During Operation Iraqi Freedom, in October of 2005, Recipient Cashe and fellow troops were conducting nighttime patrol when their vehicle was struck by a makeshift explosive. Cashe managed to exit the vehicle first, and he and a fellow soldier moved quickly to extract the driver. At that point Cashe’s uniform, fuel-soaked from the explosion, caught fire. He suffered severe burns, but he continued to the rear of the vehicle to help soldiers trapped in the troop compartment.

While other troops engaged the enemy, Cashe was able to continue to the rear and aid four troops to escape the burning vehicle. Noticing that two troops were still missing, he re-entered the burning vehicle to retrieve them. Cashe refused to board the medical helicopter ahead of fellow soldiers. He ultimately succumbed to his wounds weeks later in the hospital on Nov. 8, 2005. Sgt. Cashe’s actions that day saved many lives.

The Medal of Honor, which was upgraded from a Silver Star, was presented to Alwyn Cashe’s family on Dec. 16, 2021, by President Joseph R. Biden at the White House.