Be a Hero: Perpetuate the Legacy of the Medal of Honor; 21 Years and Counting 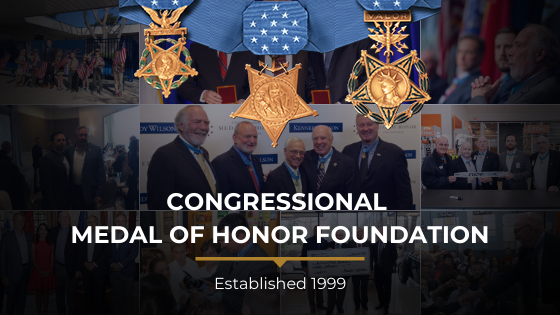 Today we celebrate the 21st anniversary of the Congressional Medal of Honor Foundation and the legacy of military personnel and civilians it supports.

Since the days of the Civil War, U.S. presidents have awarded only 3,506 Medals of Honor to our nation’s greatest heroes. The foundation was established in 1999 to immortalize their stories of courage, sacrifice, commitment, integrity, citizenship, and patriotism — values embodied by the Medal of Honor.

More than two centuries after the first Medals of Honor were awarded, only 71 Recipients are alive today. Through your support, the foundation helps these living Recipients share the honor and legacy of their fallen comrades with a new generation of Americans.

“The Medal of Honor is the greatest award I’ve ever received. And I receive it and wear it on behalf of all the men and women that fought and died for this country,” said Recipient James Taylor, a U.S. Army Vietnam veteran.

Recipients’ acts of valor are promoted and preserved through educational programs, which are the heart of the foundation’s mission. Nationwide efforts include The Congressional Medal of Honor Society’s Character Development Program, Veterans Outreach Program, ROTC, educational webinars, and school visits.

Our mission is clear and time is of the essence. Each Recipient’s story deserves to be told and remembered. Some stubbornly refused to withdraw to a safe position or traveled behind enemy lines to scout troop movements. Others took charge after a commanding officer fell. Many made the ultimate sacrifice to save their comrades. In all cases, they epitomize the best of America.

Here is how you can help! In the coming decades, the number of living Recipients is expected to decline sharply. That’s why it’s important to share their stories at schools, museums, boardrooms, and any other place where freedom is celebrated thanks to their sacrifices. Become our hero by being apart of this critical mission, give today! Through your support of the Foundation, you are sharing these stories, inspiring greatness and uplifting the values of the Congressional Medal of Honor.

The Congressional Medal of Honor Foundation is fully funded by contributions from supporters like you. Your gift will help the spirit and stories of these heroes live on for forever. Be our hero and join us in celebrating the 21st anniversary of this very important community of heroes with a tax-deductible donation online via a secure server on our website or by contacting us.

Join us in perpetuating the legacy of the Medal of Honor and honoring our nation’s heroes by making a direct impact on the work of the Society. The Congressional Medal of Honor Foundation is a registered 501(c)(3) non-profit organization with the sole mission to support the work of the Society. You can also keep up with our upcoming events, special announcements, and partner/Recipient highlights by joining our monthly newsletter.

The Congressional Medal of Honor Society’s Character Development Program has successfully trained over 17,500 educators across the country to inspire students through the six core values of courage, sacrifice, commitment,…