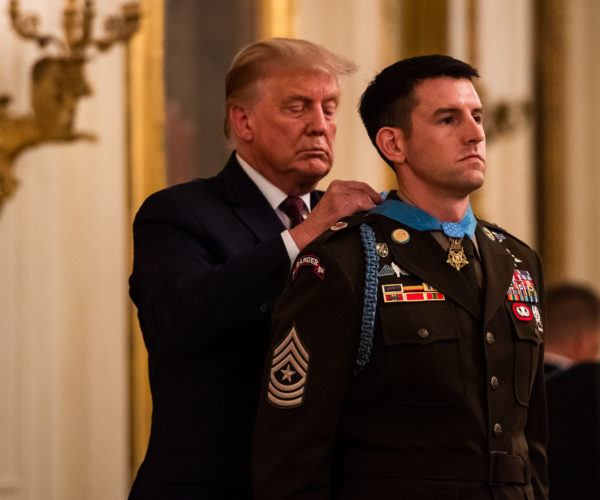 Sergeant Major Thomas “Patrick” Payne was presented the Medal of Honor by President Donald J. Trump on September 11, 2020. He was awarded the Medal for his actions in 2015 during one of the largest rescue operations in history.

Thomas “Patrick” Payne was born on April 2, 1984, and spent much of his childhood in South Carolina. After the attacks on September 11, 2001, he enlisted in the U.S. Army as an Infantryman at Fort Benning. He then went on to complete the Basic Airborne Course in 2002 and the Ranger Assessment and Selection Program in 2003.  Payne served as a sniper and team leader in the 1st Battalion, 75th Ranger Regiment until late 2007 when he was assigned to the U.S. Army Special Operations Command. In 2012, he and his teammate, Master Sergeant Kevin Foutz, won the Army’s Best Ranger Competition, a grueling competition intended to determine the best two-man team in the U.S. Armed Forces.

Sergeant Major, then Sergeant First Class, Payne demonstrated conspicuous gallantry and intrepidity – above and beyond the call of duty – on October 22, 2015, during Operation Inherent Resolve in Hawijah, Iraq. After discovering mass graves and fearing nearby Iraqi hostages would soon be executed by ISIS forces, Payne and a combined assault team made up of American and Kurdish Special Forces members hurried to the site. Under fire from the moment they landed, they fought their way to the first building and freed thirty-eight hostages. Soon after, Payne heard a call for help from a second building and left his secured position in order to provide assistance.

At the second building, Payne engaged enemy fighters as the burning building began to crumble. Knowing time was running out for the hostages inside, he left the building to exchange his rifle for bolt cutters to use on the locked doors holding the hostages. Payne then made numerous trips in and out of the burning building, dodging enemy fire, to free the hostages still inside. As a result of his actions, he and his teammates were ultimately able to free the thirty-seven hostages held within the second building. However, during this assault, one of Payne’s teammates, Master Sergeant John Wheeler was wounded and later died as a result of his injuries. Despite this tragic loss, Payne and his teammates’ actions resulted in the successful rescue of a total of seventy-five hostages from the ISIS prison compounds.

Throughout his career, Sergeant Major Payne has been deployed seventeen times, serving in Iraq, Afghanistan, and Africa. It was during one of these deployments that his knee was shattered by a grenade. While recovering from the injury, he met his wife, Alison, and today they have three children. In 2017, he graduated from Norwich University with a Bachelor of Science in Strategic Studies and Defense Analysis. Today, Payne is stationed at Fort Bragg with the U.S. Army Special Operations Command.

You can perpetuate the legacy of the Medal of Honor by sharing Recipient Payne’s story. Read his full citation and watch a video of his Medal of Honor Presentation here.

Honor the Sacrifice; Inspire the Future