MOUNT PLEASANT, S.C.—The Congressional Medal of Honor Society today announced that Duane E. Dewey, Medal of Honor recipient, passed away on October 11, 2021, in Saint Augustine, Florida, at the age of 89.

On April 16, 1952, as a corporal with 3rd Squad, Weapons Platoon, Company E, 2d Battalion, 5th Marines, 1st Marine Division (Rein), Dewey was injured by an enemy grenade near Panmunjom, Korea. While he and a fellow machine gunner were being treated by a medic, another grenade landed nearby. Pulling the corpsman to the ground and shouting a warning, Dewey smothered the grenade under his body, telling the corpsman, “Doc, I’ve got it in my hip pocket!” He was credited with saving the lives of the two other men by his daring act of self-sacrifice.

Corporal Dewey spent 50 days recovering in military hospitals. On March 12, 1953, President Dwight Eisenhower quipped, “you must have a body of steel,” as he hung the Medal of Honor around his neck at the White House.

Dewey was born in Grand Rapids, Michigan, on November 16, 1931. He left school in 1947 and worked on a farm and as a foundry worker at National Motors in South Haven, Michigan, before joining the Marine Corps in 1951. He was discharged in 1952 following his recuperation. In 2011, he told an interviewer, “I got pretty banged up in Korea.”

He returned to South Haven, Michigan, where the townspeople gifted him a newly furnished house in honor of his heroism. He operated his own repair shop for typewriters and office machines until 1973. His later years were split between Florida and his home state of Michigan.

He is survived by his children and numerous other family members. Burial arrangements are pending at this time. 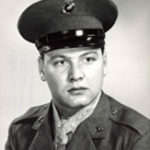