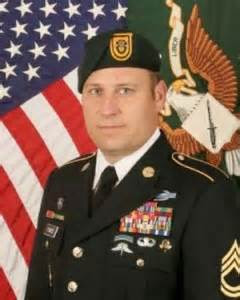 The Congressional Medal of Honor Society is proud to welcome its newest member, Master Sgt. Earl Plumlee, who was awarded the Medal of Honor by President Joseph Biden on Dec. 16, 2021 for going above and beyond the call of duty during his service in the U.S. Army during the War on Terrorism in Afghanistan.

Master Sgt. Earl D. Plumlee was born in Clinton, Oklahoma, in 1982. In 1998, he enlisted in the Oklahoma National Guard where he served as a rocket artilleryman in the 45th Field Artillery Brigade. I released him in the year 2000 to enlist in the U.S. Marines. After completing boot camp in San Diego, he was assigned to a weapons platoon, Alpha Company, 1st Battalion, 3rd Marine Regiment before being deployed to Okinawa, Japan in 2001.

He was deployed to Bahrain and Zamboanga, Philippines, before returning from deployment to attend training. In 2005, he volunteered for deployment to Iraq, where he served in the 2nd Force Reconnaissance Company. He returned in 2006 for more training before deploying to Iraq in 2008. In 2009, he enlisted in the U.S. Army and was assigned to 4th Battalion, 1st Special Forces Group where he served in the Indo-Pacific area. In 2013, he was deployed to Afghanistan, where his action date occurred in August of that year.

Plumlee was deployed to Okinawa in 2015, and then served foreign detail for Presidents Obama and Trump until 2018.  He currently serves as a Senior Weapons Sergeant at Fort Lewis, Washington.

In 2013, while deployed in Afghanistan, Master Sgt. Plumlee demonstrated gallantry and valor in the face of overwhelming fire from insurgents. On Aug. 28, Forward Operating Ghanzi Base was attacked by insurgents wearing suicide vests. Plumlee and his team raced in vehicles toward the explosion, where the driver used the vehicle to shield the team from gunfire. Plumlee, with little regard for his own safety, continuously engaged the enemy with only a pistol. Although injured, he maintained his bearings and engaged the enemy while bringing team members to safety. Because of his selfless actions that day, countless lives were preserved. Plumlee’s extraordinary heroism and devotion to duty are in keeping with the finest traditions of military service and reflect great credit upon himself, the Special Forces Regiment, and the United States Army.

Recipient Plumlee’s Silver Star was upgraded to a Medal of Honor, the United State’s highest award for military valor in action, and it was presented to him on Dec. 16, 2021 at the White House by President Joseph Biden. He was awarded for “conspicuous gallantry and intrepidity in action at the risk of his life above and beyond the call of duty.”