MOUNT PLEASANT, S.C.–The Congressional Medal of Honor Society (“the Society”) honored Dr. Aaron Epstein of Buffalo, New York; Michael Ahern of Plainville, Connecticut; and Tunnel to Towers Foundation of Staten Island, New York, as part of its annual Citizen Honors Awards on July 20, 2022, in Charleston, South Carolina. Members of the Society, comprised of the 66 living Medal of Honor Recipients, personally presented the awards to the honorees.

Epstein, Ahern and Tunnel to Towers were selected following a national search for individuals and an organization whose service or act of heroism greatly distinguished themselves.

The tradition is in keeping with the preference of Medal of Honor Recipients to shine a light on others rather than themselves as they believe that the Medals of Honor they were awarded should be seen more broadly as a symbol of the sacrifices and service of others. It is this perspective that led the Society to establish the Citizen Honors Awards.

Society President and Medal of Honor Recipient Leroy Petry underscored this view saying, “You don’t have to wear a uniform to believe in the values that we associate with the Medal of Honor–courage, sacrifice, integrity, commitment, patriotism, and citizenship.”

Recognizes Americans who accomplish extraordinary feats of heroism by risking their lives for the benefit of others in a dire situation.

Recognizes young Americans aged 17 or younger for their courage in a dire situation.

Last year, honorees were selected for saving lives, creating initiatives to help others in need, supporting veterans and more.  Past honorees are featured on the Society’s website here with profile videos of their service or act of valor. Nominations for the 2023 Citizen Honors are open.

The Society carries out its mission through outreach, education and preservation programs, including the Medal of Honor Museum, Outreach Programs, the Character Development Program, and the Citizen Honors Awards for Valor and Service. The Society’s programs and operations are funded by donations. 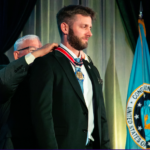 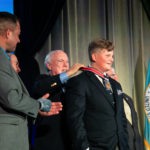 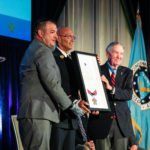 Citizen Honors Awards Honoree: Michael Ahern In 2019, a nine-year-old boy from Plainville, Connecticut, brought an unusual request to his parents. He asked if he could forgo birthday presents and…