For conspicuous gallantry and intrepidity in action at the risk of his life above and beyond the call of duty. Capt. Jacobs (then 1st Lt.), Infantry, distinguished himself while serving as assistant battalion adviser, 2d Battalion, 16th Infantry, 9th Infantry Division, Army of the Republic of Vietnam. The 2d Battalion was advancing to contact when it came under intense heavy machine-gun and mortar fire from a Viet Cong battalion positioned in well-fortified bunkers. As the 2d Battalion deployed into attack formation, its advance was halted by devastating fire. Capt. Jacobs, with the command element of the lead company, called for and directed air strikes on the enemy positions to facilitate a renewed attack. Due to the intensity of the enemy fire and heavy casualties to the command group, including the company commander, the attack stopped and the friendly troops became disorganized. Although wounded by mortar fragments, Capt. Jacobs assumed command of the allied company, ordered a withdrawal from the exposed position, and established a defensive perimeter. Despite profuse bleeding from head wounds which impaired his vision, Capt. Jacobs, with complete disregard for his safety, returned under intense fire to evacuate a seriously wounded adviser to the safety of a wooded area where he administered lifesaving first aid. He then returned through heavy automatic-weapons fire to evacuate the wounded company commander. Capt. Jacobs made repeated trips across the fire-swept, open rice paddies, evacuating wounded and their weapons. On three separate occasions, Capt. Jacobs contacted and drove off Viet Cong squads who were searching for allied wounded and weapons, single-handedly killing three and wounding several others. His gallant actions and extraordinary heroism saved the lives of one U.S. adviser and 13 allied soldiers. Through his effort the allied company was restored to an effective fighting unit and prevented defeat of the friendly forces by a strong and determined enemy. Capt. Jacobs, by his gallantry and bravery in action in the highest traditions of the military service, has reflected great credit upon himself, his unit, and the U.S. Army. 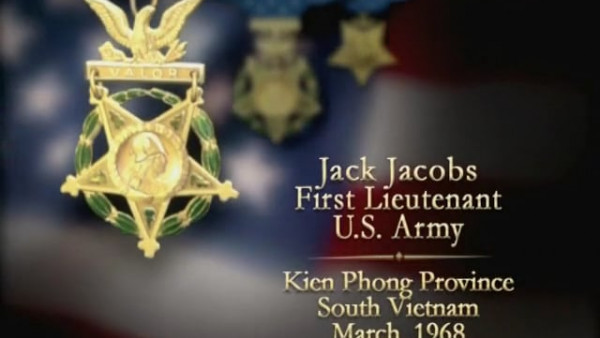 What is Courage?: Modification for Distance Learning