Early in the morning of 18 April 1945, he led his company through the shell-battered, sniper-infested wreckage of Nuremberg, Germany. When blistering machine-gun fire caught his unit in an exposed position, he ordered his men to take cover, dashed forward alone, and, as bullets whined about him, shot the three-man gun-crew with his carbine. Continuing the advance at the head of his company, he located an enemy patrol armed with rocket launchers which threatened friendly armor. He again went forward alone, secured a vantage point, and opened fire on the Germans. Immediately he became the target for concentrated machine-pistol and rocket fire, which blasted the rubble about him. Calmly, he continued to shoot at the patrol until he had killed all six enemy infantrymen. Continuing boldly far in front of his company, he entered a park, where as his men advanced, a German machine gun opened up on them without warning. With his carbine, he killed the gunner; and then, from a completely exposed position, he directed machine-gun fire on the remainder of the crew until all were dead. In a final duel, he wiped out a third machine-gun emplacement with rifle fire at a range of 10 yards. By fearlessly engaging in four singlehanded firefights with a desperate, powerfully armed enemy, Lt. Daly, voluntarily taking all major risks himself and protecting his men at every opportunity, killed 15 Germans, silenced three enemy machine guns, and wiped out an entire enemy patrol. His heroism during the lone bitter struggle with fanatical enemy forces was an inspiration to the valiant Americans who took Nuremberg. 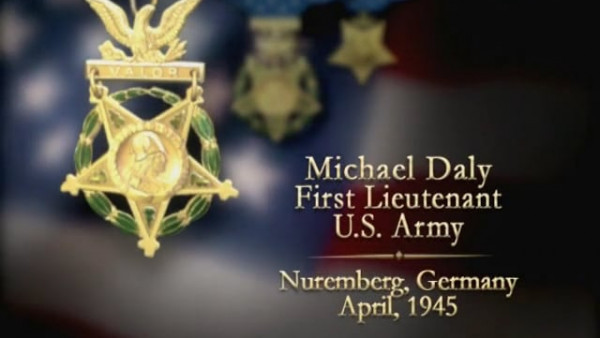