For conspicuous gallantry and intrepidity at risk of life above and beyond the call of duty on 27 August 1944, in the vicinity of Montelimar, France. As his platoon advanced upon the enemy positions, the leading scout was fired upon and 2d Lt. Gregg (then a TSgt.) immediately put his machine guns into action to cover the advance of the riflemen. The Germans, who were at close range, threw hand grenades at the riflemen, killing some and wounding seven. Each time a medical aidman attempted to reach the wounded, the Germans fired at him. Realizing the seriousness of the situation, 2d Lt. Gregg took one of the light .30-caliber machine guns and, firing from the hip, started boldly up the hill with the medical aidman following him. Although the enemy was throwing hand grenades at him, 2d Lt. Gregg remained and fired into the enemy positions while the medical aidman removed the seven wounded men to safety. When 2d Lt. Gregg had expended all his ammunition, he was covered by four Germans who ordered him to surrender. Since the attention of most of the Germans had been diverted by watching this action, friendly riflemen were able to maneuver into firing positions. One, seeing 2d Lt. Gregg's situation, opened fire on his captors. The four Germans hit the ground and thereupon 2d Lt. Gregg recovered a machine pistol from one of the Germans and managed to escape to his other machine-gun positions. He manned a gun, firing at his captors, killed one of them and wounded the other. This action so discouraged the Germans that the platoon was able to continue its advance up the hill to achieve its objective. The following morning, just prior to daybreak, the Germans launched a strong attack, supported by tanks, in an attempt to drive Company L from the hill. As these tanks moved along the valley and their foot troops advanced up the hill, 2d Lt. Gregg immediately ordered his mortars into action. During the day, by careful observation, he was able to direct effective fire on the enemy, inflicting heavy casualties. By late afternoon he had directed 600 rounds when his communication to the mortars was knocked out. Without hesitation he started checking his wires, although the area was under heavy enemy small-arms and artillery fire. When he was within 100 yards of his mortar position, one of his men informed him that the section had been captured and the Germans were using the mortars to fire on the company. Second Lt. Gregg with this man and another nearby rifleman started for the gun position where he could see five Germans firing his mortars. He ordered the two men to cover him, crawled up, threw a hand grenade into the position, and then charged it. The hand grenade killed one, injured two; 2d Lt. Gregg took the other two prisoners, and put his mortars back into action. 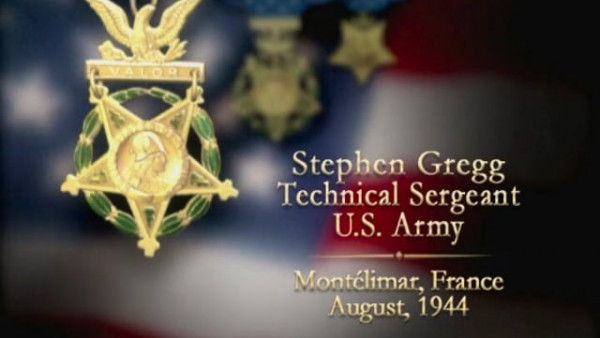