A large force of German Infantry was discovered near to their position and pressed an attack on Coolidge’s unit. As there was no officer present, he assumed command. For three cold and rain-soaked days, Coolidge exposed himself to enemy fire as he went through the ranks, inspiring and supporting his men, many of whom had not seen combat before. His able leadership enabled his combat group to repulse repeated attacks by the enemy.

On the fourth day, a renewed enemy attack included heavy and light arms, supported by two tanks. Coolidge moved close enough to the tanks that the tank commander was able to call out for Coolidge’s surrender. He responded, “Sorry, Mac, you’ll have to come and get me,” and then took aim with a bazooka, which failed to function. Coolidge then used hand grenades to inflict heavy casualties on the infantry troops surrounding the tanks. When it became apparent that their position was being overrun, Coolidge oversaw an orderly retreat and ensured he was the last to leave the position.

For his actions on those four days, Coolidge was awarded the Medal of Honor in a ceremony near Ulm, Germany, on June 18, 1945.

Coolidge was born in Signal Mountain, Tennessee, on August 4, 1921, and attended Chattanooga High School in Chattanooga, Tennessee. Following his Army service, Coolidge returned to Tennessee and worked for the Veterans Administration before taking up the family business, Chattanooga Printing and Engraving.

Although Multiple Sclerosis, a disease of the central nervous system, limited his movement in his later years, he remained committed to spreading the values of patriotism, integrity, and courage. He was the inspiration behind the establishment of the Charles H. Coolidge National Medal of Honor Heritage Center in Chattanooga.

He is survived by three sons and numerous other family. Burial arrangements are pending at this time.

There are 68 recipients alive today. 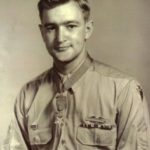